OU News
You are at:Home»Science, maths, computing and technology»Maths»Why are less than 10% of maths professors women?

Mathematics has long been dominated by male academics and scientists, but why? In her inaugural lecture, Professor of History of Mathematics June Barrow-Green explores the history of women in mathematics and the centuries-long struggle for women mathematicians to gain equality.

Professor June Barrow-Green, whose working life began in an art gallery, started her studies with Foundation courses in Arts and in Mathematics at the OU. She went on to gain a BSc and MSc in Mathematics at King’s College London, mixed in with a stint in the City, before returning to the OU to complete a PhD.

“I came from a family which was rather Victorian and didn’t believe in educating girls,” she said. “The OU opened the door to an education I thought I would never have. It turned up trumps again when I decided to do a PhD in the History of Mathematics, but I wanted it to be based in a mathematics department. The OU was the only university in the country to advertise exactly that course of study.” 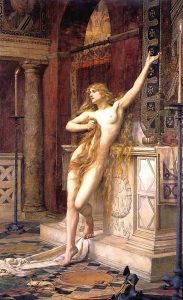 The history of women in mathematics is filled with stories of inequality, mockery, scorn, and occasional violence. From Hypatia, a mathematician who assisted her father Theon of Alexandria with his work and was murdered by a mob in 415 CE; to Maryam Mirzakhani, the first woman to win a Fields medal – the mathematics equivalent of a Nobel Prize – in 2014.

“Although it is now recognised there is no difference in the ability of men and women to do mathematics, that recognition was slow in coming and hard fought, and there is still much work to do,” explains Professor Barrow-Green. “In Britain today, less than 10% of mathematics professors are women. That needs to change.”

Watch Professor Barrow-Green’s lecture, “He denies the very existence of a woman mathematician”

Read how the OU supports women in maths