OU News
You are at:Home»Education, languages and health»Education»Following in her mother’s footsteps

As a child Demelza Dachtler grew up watching her mother, Julie, study for a Masters with The Open University. Today, she’s an OU graduate herself, is on the verge of completing her own OU Masters, and is about to become a mother for the first time. We spoke to Demelza last year, and now, in the run up to Mother’s Day, we caught up with both her and her mother.

“I had a degree from a traditional university, and was teaching, when I decided to do a Masters in Education with The Open University. My children were very young at the time, and hadn’t yet started school.”

“The OU allowed me to fit my studies around caring for the children. I could work on the computer, save my work, then do dinner, and come back to the work later. The computer was in the bedroom area too, so I could keep an eye on them while I was studying too.”

“At the time, the study materials were all books, but Demelza has most of hers on her tablet now.”

“I come from a family of graduates. I was justifiably proud of my nursing diploma; however, I had a gnawing feeling that I was one step behind my family. A colleague at Aeromedical Evacuation Squadron had completed the OU Nursing Practice degree and was impressed with the level of support she had received from her tutors while studying.”

“Support, along with flexibility to study while on the move, were absolute necessities for me and led me to the same degree. I was able to complete my reading at 35,000ft, and submit my assignments online, wherever I was in the world.”

“Towards the end of my degree project, my tutor encouraged me to continue my studies. It was her belief that I was capable of postgraduate study that led me to carry on.” Demelza’s hoping to complete the MSc Advancing Healthcare Practice in summer 2019. 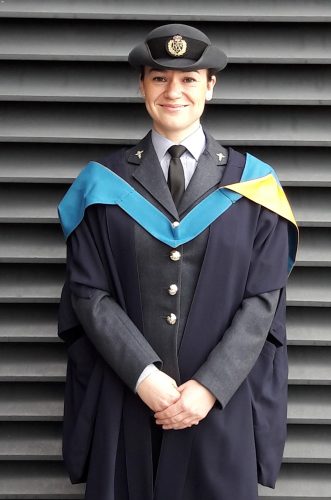 Julie completed her MA in Education in 1993 but wasn’t able to attend her graduation ceremony as it was too far to travel with two small children. She remembers attending Demelza’s graduation; “It was at a football ground; an impressive venue. I was so proud to watch her graduate.”

Demelza said “My biggest Open University related high was shaking my Dad’s hand at my degree ceremony in Milton Keynes, as a fellow graduate.”

“I am now pregnant and due to give birth in April, so it’s a race against time to finish as much of my MSc as I can before my son gets here! I’m still hoping that I can complete the course this year, so that my mother and I can both graduate together.”

Liz works in the Media Relations team within the Communications Unit at The Open University. She has over 15 years' marketing experience working across a range of sectors, from diamonds to shampoo. She has a BSc (Hons) in Management from UMIST. In her spare time, Liz is usually found on roller skates or off travelling, having adventures.