“When I started studying, you didn’t need a degree to become a nurse, so I did a Diploma of Higher Education in Adult Nursing,” she explains.

“Then after a blur of basic training, preceptorship, flight nurse training and two operational deployments of Afghanistan, I decided the time was right to top up my diploma to a degree. I definitely recommend the OU’s BSc (Hons) Nursing Practice course to nurses who want to do the same.”

Since then, Demelza has moved on to postgraduate study, which she’s successfully managing to do alongside her military duties. She’s hoping to complete the MSc Advancing Healthcare Practice in summer 2019.

From Corporal to Sergeant, and making a difference at work

“As well as gaining more qualifications, my OU study has made me so much better at my day-to-day job,” Demelza says. “And it’s really helped me climb the military ranks – I’ve now moved from Corporal to Sergeant!”

“And besides promotion, my study has also helped me examine the way I work. I’ve made some effective, evidence-based improvements at work that have made a real difference to my workplace and our patients.”

Demelza can see a lot of similarities between people serving in the armed forces and distance learners. “So many positive qualities describe them both,” she explains. “You have to be disciplined, able to prioritise, be organised and determined.”

Keeping up with Mum and Dad 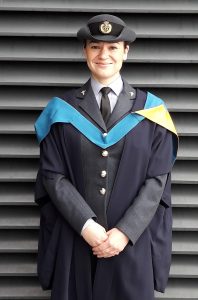 Demelza comes from a family of graduates and says her biggest ‘high’ of her study experience was the moment she was able to shake her dad’s hand as a fellow graduate at her degree ceremony.

“My Mum and brother have Masters degrees and my Dad has a Bachelors degree,” she says. “I was proud of my nursing diploma, but I knew I was one step behind them, so decided to study more.”

“My Mum received her MA in education from the Open University but never attended her degree ceremony. I want to complete my MSc so my Mum and I can attend a degree ceremony together!