OU News
You are at:Home»Science, maths, computing and technology»Open University scientists marvel at the rarity of the Mercury Transit

Members of the Open University’s space science community gathered together to watch a one-off celestial event on Monday 11 November.

Professor David Rothery and Jack Wright, research assistant, were joined by employees from across the campus to witness the Mercury Transit.

For the first time in three years, planet Mercury was visible as it travelled between the Sun and the Earth. 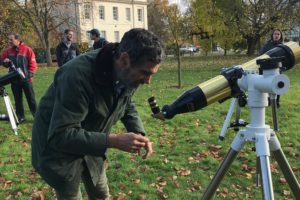 Professor Rothery at the Mercury Transit

Scientists and researchers watched Mercury make first contact through specialist equipment, including telescopes and solar viewers, as it is far too dangerous to be viewed by the naked eye.

Over the course of six hours, Mercury – a small, circular, silhouette – made its way across the Sun’s disk.

A rare occurrence, the transit will not be witnessed again until 2032.

“Mercury takes 88 days to go around the Sun but its orbit is inclined to the Earth’s orbit. So you only have the two orbits in the same space at particular times of the year – May and November. If when Mercury passes between the Earth and the Sun outside of May or November, it will pass above or below the Sun in the sky. Therefore, there’s only a brief window to observe a transit.

“I’ve been working for 15 years on the European Space Agency’s BepiColombo mission, which was finally launched towards Mercury last year. So, it was great to see the silhouette of the planet that we are about to visit as it crosses the face of the Sun. It gave us a chance to tell people what a strange little world Mercury is.”

On Thursday 14 November, Professor Rothery, along with colleague Carole Haswell, will be delivering an inaugural lecture on Discovering New Planets. David’s talk is: The puzzle of planet Mercury – why go there? Held in the Berrill Lecture Theatre, Open University, Milton Keynes, between 6pm and 8pm, the talks will be live-streamed for those who cannot make it in person.

For more on the inaugural lecture visit: http://www.open.ac.uk/science/physical-science/events/discovering-new-planets-inaugural-lecture-david-rothery-and-carole-haswell