OU News
You are at:Home»Science, maths, computing and technology»Science»Some like it hot – OU scientist explains the mission to Mercury

The BepiColombo spacecraft blasted off into space, bound for Mercury in the early hours of Saturday 20th October from French Guyana and travel 9 billion km to reach Mercury in 2025. The hope is that its findings will help uncover the mysteries of the least explored planet in the inner Solar System and the closest to the Sun.

BepiColombo is jointly owned by the European and Japanese space agencies (ESA and JAXA). It will study and understand the composition, geophysics, atmosphere, magnetosphere and history of Mercury. The mission is described as an outstanding example of international collaboration at the highest level between the European and Japanese space agencies. The UK’s involvement is managed and funded by the UK Space Agency.

Launching BepiColombo towards Mercury comes after two decades of collaborative effort by colleagues in many European nations plus Japan, and more recently plenty of sharing data and ideas with scientists and engineers involved with NASA’s earlier MESSENGER mission to Mercury.

Speaking ahead of the launch the Science Minister Sam Gyimah said:

“As this mission to Mercury sails under the stars we can reflect on the features of UK science that have made it possible. It is a sign of how far our space industry has come in exploring how much further humanity can go.

“Much of the spacecraft was built right here in the UK by our growing space sector, employing nearly 40,000 people right across the country. Our modern Industrial Strategy is building an environment in which it will continue to thrive.” 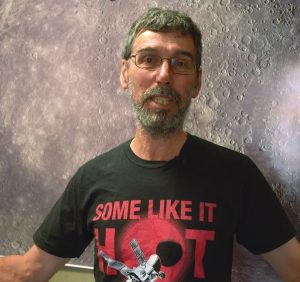 David Rothery, Professor of Planetary Geosciences at The Open University has been involved with the mission since 1994 when he attended a meeting at ESA HQ in Paris to present the geological case for a return to Mercury. He is also the UK lead co-investigator for Geology for MIXS, the Mercury Imaging Spectrometer which is on board the mission.

In 2004 he served on the Particle Physics and Astronomy Research Council’s “project peer review panel” that recommended the UK to support and provide the scientific instruments carried to Mercury by BepiColombo. He has led ESA’s Mercury Surface & Composition Working Group since 2007 and from 2006-2014 he was the UK Lead Scientist for MIXS, the Mercury Imaging Spectrometer and since then been MIXS Lead-Co-Investigator for Geology. He has taught geology and planetary science at The Open University since 1994 and also heads the research team making geological maps of Mercury.

We really need to understand Mercury better. So much about it seems wrong for a planet that close to the Sun, so maybe it originated further out. A collision with the proto-Earth or proto-Venus could be what robbed it of so much of its original rock.

As a volcanologist though, one aspect that really impresses me about Mercury is all the volcanic explosion vents. They are spectacular evidence of violent eruptions, powered by escaping gas that recurred for much of the past four billion years.

Prof Rothery said BepiColombo carries the most sophisticated suite of scientific instruments ever sent to Mercury. The UK-led X-ray spectrometer (MIXS) on board BepiColombo will pin down the chemical make-up of the lavas and how this varied over time, it will be able to map the distribution of sulfur and other volatile elements in detail, and may even be able to detect carbon from the planet’s earliest crust that we think we can see excavated by some of the biggest craters. 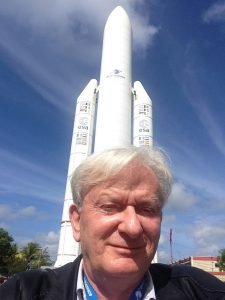 Prof John Zarnecki at the launch in French Guyana

OU Emeritus Professor John Zarnecki, was invited to witness the launch by the European Space Agency. He was involved in the early planning stages for the mission in the 1990s. This early planning initially involved a lander to take measurements on the surface of Mercury, which would have included an OU-built instrument, but this was later dropped, he said. He recalls the ups and downs of the project over the years and he sits on the Space Science Advisory Committee which gives him first-hand knowledge of missions:

As part of this work, we receive regular reports of progress on missions under development.  BepiColombo has been particularly challenging (not uniquely I should say!).  Many space projects go through hard times when technical, schedule and financial difficulties seem insurmountable.  And Bepi was no exception! But that is now behind us.

BepiColombo consists of two individual orbiters: the Mercury Planetary Orbiter (MPO) to concentrate on the planet itself, and the Mercury Magnetospheric Orbiter (MMO, but recently named ‘Mio’) to investigate its magnetosphere and exosphere.

Once in orbit the Japanese component of the mission, Mio, will be set spinning (for stability) and be released into an eccentric orbit to study the magnetic field, dust and environment of charged particles surrounding the planet.

The European orbiter, known as the Mercury Planetary Orbiter, will then lower itself into a more circular orbit optimised for study of the planet’s surface and interior.

Prof Rothery said: “It’s a really exciting mission, because what we learned from the recent NASA Mission to Mercury was that it’s a planet which we don’t understand. It’s surface is rich in volatile materials, which shouldn’t be the case for a planet that close to the sun. We can see there have been volcanic eruptions but we don’t know what the volatile substances are.  And that’s one thing that the British-built instrument will help us understand.

BepiColombo will launch from Europe’s spaceport in French Guiana at 02:45 UK time on Saturday (20th October). The spacecraft is named after Giuseppe (Bepi) Colombo (1920-84), an Italian mathematician and engineer, who studied Mercury’s orbital motion.

As a kind of “soundtrack” there is some Mercury-inspired music composed as part of the Planets 2018 project. This was set up to commemorate the centenary of Gustav Holst’s Planets Suite with music inspired by the science of the planets. The Mercury movement is now online.