OU News
You are at:Home»Arts and social sciences»Society and politics»Former Zimbabwean refugee on the transforming power of education

Alice Chigumira came to the UK in 2002 as a refugee from Zimbabwe where she’d worked for the Minister of Foreign Affairs for 12 years. She grew up during a time of social upheaval and distress, eventually forced out by political instability, to settle in Reading. As a widow with two small children, Alice adjusted to some huge changes and turned to education to give her the skills, knowledge and confidence she needed to embrace her new life. And, alongside her role as an adult social worker she continues to challenge prejudice, stereotypes and misconceptions by advocating a more positive image of refugees. In 2014, Alice was recognised by the OU for her contribution to public services, education and culture and awarded an Honorary Master of the University degree.

‘I couldn’t be who I was before’

“I had such a sense of self and self-worth when I was working, when I was a diplomat, I had everything going for myself and my family, but life’s environments and events can take everything away from you.

I can’t really complain about what happened because that would stop me going forward – it happened. But I did lose my self-worth. I came to this country and couldn’t be who I was before.

“I had to start from scratch and I took any job I could find. So, I went from working with the Zimbabwean Foreign Minister to doing menial jobs, and this can make you lose your sense of worth; you think, ‘Really, is this what I’m worth?’

“Life in the UK was very different from life in Zimbabwe and I spent a considerable time getting used to the differences – including the climate!”

Alice’s environment and family finances prevented her from furthering her education in the way she’d hoped in Zimbabwe, so she enrolled in secretarial college. Education has always been important to her, and she used it to help her find herself again in the UK.

Knowledge is powerful, no one can take it away from you. You can lose everything in your life, but no one can take away your knowledge; that’s what makes education so powerful.

“I thought about trying for a degree, but couldn’t imagine how, as a widow with two small children, I’d be able to fit in study. Then I heard about the OU.

“The Open University changed my life during the time when I really needed something to give me a purpose. I was ill and I had breast cancer and I didn’t have anything to look forward to. I picked up a magazine one day when I was sitting lamenting on my five months sick leave, thinking what am I going to do? I saw an advert for The Open University and I thought ‘I’m still working in Social Care, what else can I do?’ That was the start of it. I applied and they helped me through a difficult time. Every day I had a purpose to wake up in the morning and study and I haven’t stopped since then.”

And she hasn’t. After completing a certificate with the OU, she went on to do a BA and then an MA with Reading University.

“Taking that first step and registering to study opened doors for me. After completing my Certificate in Social Sciences, I went on to do a BA in Social Work and enjoyed it so much that I progressed to an MA in International Relations, an area I’m passionate about. Studying has developed me personally and has transformed my skills career-wise.

Alice now works as an adult social worker and still campaigns for what she passionately believes in. The Reading Refugee Support Group helped Alice to establish herself in the UK and she served as the group’s chairwoman helping many local refugees build their lives in the UK. Her work empowers refugees to adapt to their new situations, learn new skills, forge new careers and build a better life for themselves.

“I’m now employed as a social worker for adults and am an activist in my own way. I work with refugees and with organisations dealing with those suffering deprivation, and I try to develop myself in between working and being a wife and mother. 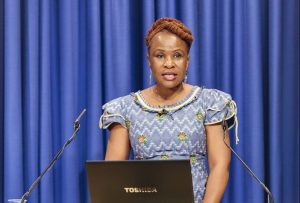 “Not only has my career developed, but so have my personality and persona in the sense that I’m not just a 9 to 5 employee, but I also enhance my skills by working in a charitable way for other issues that I see as important in the world.

“You might have been knocked by life events, whether that be a death in the family, or marriage, or losing your work or other things, but that doesn’t mean the human being in you has been taken away. These are life events and by trying to do something for yourself, knowing you’re doing it for you and knowing your purpose, you’ll get there. I truly believe knowledge is powerful.”

“When I was doing my MA it was very difficult because I still had to work. I had breast cancer at the time. The illness just impacts totally on your health; you don’t have any strength. But my children were there to make sure I could do it and would tell me, like they always have, that I have the strength in there and they motivated me to continue.”

‘Such a proud moment’

Alice has been motivated by her children’s encouragement and serves as an excellent role model to them and others, proving that education can open doors. She was particularly proud to receive an honorary degree from the OU for her contribution to public services, education and culture.

“Receiving my honorary degree was such a proud moment for me. It was incredible to be able to relate so much to every student who was walking up to receive their certificate or BA or whatever they’d studied for. I thought back to the moment when I’d done my first degree and the tears that were flooding there. Parents and relatives were there and felt so moved that their family members were graduating. Afterwards I did a lot of talking with students and parents and it’s incredible how much the OU moves so many people.

What’s next for Alice when she’s achieved so much already?

“I’m now thinking about doing a PhD. I’ve had talks with the OU and am going to sit down with a few people and talk about options.

“There are always risks in life, but I’m willing to take a risk. I’m interested in things to do with humanity; there’s a refugee crisis in the world – 50 million more refugees than there were in the Second World War. We need to be kinder to each other when things go bad.

And what would she say to someone thinking of studying?

“If you’re thinking of coming to The Open University take that step now, there are people waiting to help you and you don’t know how it can make you feel great.”

Alice Chigumira gave a keynote speech at the OU’s Charter Day celebrations earlier this year about her experiences, her education and her passion for books.