OU News
You are at:Home»Around the OU»University news»Open University looks to the future as it celebrates 47 years of transforming lives

The Vice-Chancellor of The Open University (OU) has called on the organisation to draw inspiration from its “glorious” past as it marks the 47th anniversary of receiving its Royal Charter.

A series of special events have been taking place across the OU, including keynote speeches from Peter Horrocks, as well as the University’s Pro-Chancellor, Richard Gillingwater.  The day has also seen the OU showcasing some of its world-leading technology at its Milton Keynes campus, as well as the official launch of a new Digital Archive to mark the centenary of Harold Wilson, one of the leading figures behind the creation of The Open University.

Addressing the university via video-link from the OU’s main lecture theatre in Milton Keynes, the Vice-Chancellor drew inspiration from another of the university’s founders – Lord Asa Briggs, who died earlier this year and who served as Chancellor of the OU for fifteen years.  Asa Briggs predicted that “…more personalised communication, more scattered and two-way communication will become increasingly important and the OU should be in the lead.”

He told the University:

“We can and we will have that ambition again.  To have leadership in digital innovation, to grow our student numbers, to proudly say we are the UK’s most popular university, the one that makes the biggest difference to the lives of its students.  I am confident the university can reclaim that ambition.  And we can do it, with a little bit of love, and quite a fight.”

We’ve been running live updates throughout the day as it happens:

Peter Horrocks has wrapped up his opening address by drawing inspiration from Asa Briggs’ passion for the OU as he looks to the future:

VC @PeterHorrocks draws inspiration from Asa Briggs’ passion for the OU as he looks to the futurehttps://t.co/353D1QJFVG

You can read the full text of the Vice-Chancellor’s speech here.

As part of the celebrations marking the centenary of Harold Wilson, the OU has launched a new digital archive celebrating the work one of the OU’s key founders.  His son Robin – himself an emeritus professor at The Open University, joined today’s event and recalled his  father coming up the plans for the OU on a family holiday in the early 60s.

Former Chancellor of The Open University, Baroness Betty Boothroyd, also joined today’s celebrations by recalling the influence Harold Wilson had had on her personally, both as a politician and as Chancellor of the OU. In this audio recording, she described how important both roles were to her, and how her time as OU Chancellor compared with being Speaker of the House of Commons: 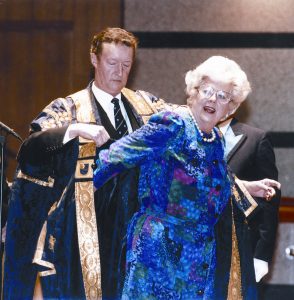 Baroness Betty Boothroyd is installed as Chancellor of the OU by then VC, Sir John Daniel