OU News
You are at:Home»Around the OU»The OU speaks out»Social mobility must focus on adult learners too, says OU Vice-Chancellor

Social mobility is certainly the hot potato where the May Government is concerned. But is the new Prime Minister really looking in the right places? asks OU Vice-Chancellor Peter Horrocks.

Theresa May’s aspirations for education policy – her recent announcements on more grammar schools and allowing universities to support state schools – show a boldness that should not focus solely on one generation, said Mr Horrocks.

The Vice-Chancellor was delivering a hard-hitting speech at the Policy Exchange Conference on Wednesday September 15th looking at the question of What does the new Government mean for HE and FE?

He told delegates from across the HE and FE policy sector that Prime Minister Theresa May’s stated mission to tackle social mobility and plans for an “Industrial Strategy” must embrace adult learning and especially the part-time sector.

He said “learners older than conventional university students” must be playing a vital role in addressing these two domestic policy priorities outlined by the new Prime Minister.

Referring to Mrs May’s stated intent to make her’s a Government that would “help anybody, whatever your background, to go as far as your talents will take you”,  he said:

I take the PM’s commitment to helping anybody as not just meaning 11-year-olds or 18-year-olds. Through its now almost 50-year lifetime, The Open University has educated almost two million students who have had the chance to ‘go as far as (their) talents will take them’.

We are the great British corrective to the unfair distribution of life chances. And, we believe, the single largest engine of social mobility among all educational institutions in the UK.

His speech set out six new areas of “ask” for the Theresa May Government when examining improvements in education policy. They aim to ensure that that part-time degrees and degree apprenticeships have equal national importance alongside full-time degrees and within the wider apprenticeship arena. This, he stressed was vital to meet “present and future challenges”.

The first recommendation is the further extension of loan availability to Equivalent and Lower Qualification, or ELQ courses. The David Cameron Government relaxed the restrictions on ELQs for those studying Science, Technology, Engineering and Maths (STEM) subjects, but Mr Horrocks says these restrictions need to go further if they are to be effective. He said:

Our experience is that the complexity around equivalent and lower qualification courses are putting far too many people off.

The second recommendation is the introduction of next step loans. These are loans available for a year’s worth of study – that’s 60 credits in OU part-time terms.  Mr Horrocks says: “We have found that the financial commitment to several years of study is a significant barrier to students signing up for courses.”

These recommendations are directly aimed at tackling the tumbling numbers in part-time education. Mr Horrocks said that so far, despite welcome initiatives by the Government such as permitting part-time students to apply for maintenance loans, there is still a long way to go to achieve improvement. The number of part-time university students starting degree courses in England in 2014/15 was 58% fewer than five years ago in 2009/10. 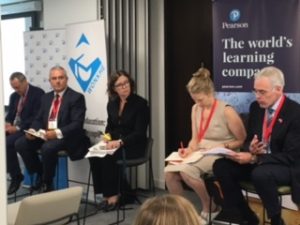 The Prime Minister’s policy on “Industrial Strategy” is still emerging but Mr Horrocks said addressing the skills shortage in the workforce to improve post-Brexit productivity ought to feature in this.

He said that for employers it is the stock of workers, from 18 to 80, that represent the real challenge. He pointed to recent research by London Economics revealing that the effects of higher education study for those already in the workforce creates an immediate productivity improvement in the student and their co-workers.

The Government’s hope is that its reforms to HE and opening up the marketplace will encourage new providers, said Mr Horrocks. He said some of these potential newcomers may target mature and part-time learners.

Pointing to the OU’s own advances in this area he said the OU welcomed “diversity of choice and competition” and referred to the current work with ‘Independent Higher Education’ (formerly Study UK which brings together many alternative providers) and the Quality Assurance Agency (QAA) to create a validation service for Alternative Providers.

This month the OU announced five new providers are joining The Open University’s degree validation programme, ahead of a pilot scheme to test a better model for the sector. All five new partners received the go-ahead to run degree courses just over six months after first approaching the OU, bringing current partnerships to 30, with more discussions in the pipeline.

Mr Horrocks outlined the four further recommendations which the OU wants to see the Government consider which are:

Mr Horrocks finished by reminding conference delegates that nearly 50 years ago the OU was set up to “make HE accessible to everyone”. And he urged: