Three Open University Law students have been awarded scholarships from the highly regarded Gray’s Inn – one of the four Inns of Court which has the exclusive right to call men and women to the Bar of England and Wales.

The prestigious scholarships recognise merit, intellectual ability, advocacy and drive and determination to succeed at the Bar. The scholarship programme promotes equality and diversity in the legal profession, ensuring that the best people are attracted to a legal career, regardless of their background.

OU students Laurie-Elizabeth Ketley (29), Liam Chin (33) and Eleanor Mayhew-Hills (26) will now all receive full or part funding from Gray’s Inn to complete their Bar Professional Training Course. Laurie-Elizabeth has received the Baroness Hale of Richmond Scholarship, which is one of the Inn’s most prestigious Bar Course Scholarships, reserved for outstanding candidates of exceptional merit. Lady Hale told The Open University of her pleasure in knowing that the scholarship bearing her own name has gone to “a woman who has shown great courage and determination, as well as intellectual ability, in triumphing over adversity”.

Liam Chin has also been awarded a residential scholarship, which will afford him the opportunity to be fully involved in the life and community of the Inn, while Eleanor has received an additional Northumbria Bar Course Scholarship.

The Gray’s Inn scholarship programme has been established because it believes that its Members’ talent and drive should determine whether they make it to the Bar, not their financial circumstances.

“A lack of funds should not prevent candidates being able to access the legal profession. The scholarship system enables talented students to achieve their goals and supports them in their ambition to practise law.”

“We are committed to ensuring that no capable individual ever falls by the wayside for financial reasons alone, and that is why each and every Gray’s scholarship is awarded entirely on merit.” 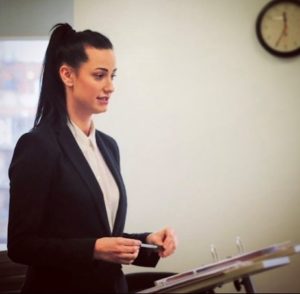 Single mother Laurie-Elizabeth who began her OU Law Degree in 2018 is the first person in her family to go to university. She decided to study as a way of turning her life around following a difficult period. Within a short space of time, she found herself going through a divorce, adjusting to being a single parent, and grieving for her younger sister who had unexpectedly died due to a hereditary heart condition that Laurie-Elizabeth herself was then diagnosed with.

She said: “I was sad and embarrassed about my life. However, it made me determined to do something about it, so I began studying and found it brilliant. With The Open University, and especially the Open Justice module, you get opportunities that you might not get otherwise – great experience that is hard to come by.

Gray’s Inn awards four Baroness Hale of Richmond Scholarships each year, in recognition of the lifetime achievements of Master Hale, former President of the Supreme Court.

“I am so pleased that the scholarship which bears my name should have been awarded to such a worthy candidate – a woman who has shown great courage and determination, as well as intellectual ability, in triumphing over adversity. I wish her every success in her Bar course and in her future career.” 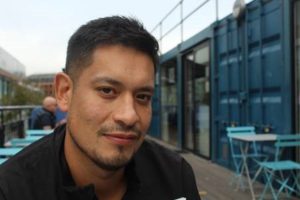 Liam, a chef who has worked in Michelin-starred restaurants, began his studies in Law with The Open University in 2018.

He said: “I decided to study with the OU because I needed to be able to support myself by continuing to work full time whilst studying. The OU has been so supportive throughout. I was worried that distance learning might mean that you would be completely on your own, but it didn’t. Your tutors buy in to your dream and really encourage you – they delight in your success.

“Having passed the initial written application stage, I went to the interview and a week later I had an email to say I’d been awarded the Wilfred Watson scholarship. I was absolutely overjoyed. If ever there was a seal of approval for the OU and myself, this was it. Every OU student wonders if their degree will be viewed in the same light as one from a traditional university. This is proof that as long as you perform well and achieve good results, it is.

Eleanor was originally studying in The Netherlands but, after giving birth to her son in May 2017, headed back to the UK where she took up OU study. She began her third year just six days after her second child was born in 2019. Now Eleanor is on the cusp of finishing her studies, with just one assignment to go.

She said: “Studying with two young children has had its moments! Thankfully they have been easy children but it’s been hard when they’ve been poorly, so I’ve always tried to be a couple of weeks ahead of where I need to be.

“I went through the court system with my dad when I was a child as he fought for custody of me. I saw barristers in action and wanted to be like them, so my dad is very proud that something good has come of what we went through.

“The OU has always been so understanding of my situation. Without the OU being remote, there’s no way I could have achieved a degree. I’m very thankful.”

“It is essential that measures are in place to ensure the legal profession attracts the best, most talented and hardest working individuals. Scholarships like these ensure that equality and diversity are promoted within the profession. The Open University Law School is incredibly proud of the success of its students in gaining these prestigious scholarships and recognises the contribution they make to furthering diversity within the profession.”