OU News
You are at:Home»Student stories»My OU journey has been life altering

As Justine Wilkes-Kendall crossed the stage at the Barbican degree ceremony, she was proudly proving wrong the words of her social worker many years before who told her that as someone who’d been in the care system, she was “statistically more likely to go to prison than to university”.

“These words really stuck with me and I was absolutely determined to disprove this uninspiring and damaging utterance” says Justine who passed her BA (Hons) English Literature degree with a 2.1 in September 2019.

Justine missed the opportunity to go to university after collage as she felt she needed to come out of foster care and live independently. She worked in business for years until the birth of her daughter Trinity made her reassess her situation. “Having Trinity made me want to do better, to be able to provide for her independently, to ensure she had the best start and role model possible”

It was while she was working as a Teaching Assistant in a local secondary school that her thoughts started to turn to her teenage ambition of becoming a teacher.

“During a conversation with a teaching colleague I had previously worked with I mentioned that I had always dreamed of teaching English. Within fifteen minutes she had the OU website open, I was signed up and the student finance was filled out. I was excited and terrified”

The first year was a huge learning curve but even when it got tough, the words of her social worker ran through her head leaving her utterly determined to achieve.

“I was working three jobs at the very start of my degree. There were nights and times I didn’t know whether what I was reading or writing was gobbledegook or not. There were occasions when I cried, threw the books on the floor and thought what on earth am I doing? The painstaking referencing, drafting, re-drafting, editing the word-count and then the butterflies as you click submit. The waiting. Stomach churning as you wait for your results.” 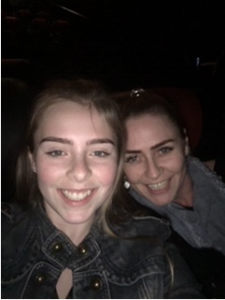 Justine and her daughter Trinity

“Attending my first tutorial I thought I’m going to be the least intelligent person in the room. It wasn’t like that at all. Everyone was engaged and learning, thinking, challenging, talking. It led to people really bonding in their learning. My family rallied round, particularly my daughter who would do all the jobs in the house and then come in put down a cup of tea kiss me on the head, tell me she believed in me and that I could do it! There was no question of failure, failure was not an option.”

Although she had not yet graduated, studying had given Justine the confidence to apply for a graduate role in a nearby school. Remarkably, the school agreed to take her own due to the fact she had achieved excellent results in her studies so far. With the new job, came a substantial pay increase and a supportive working environment.

An increase in confidence and salary

“I was now earning three times more and not having to do three jobs. The new job was brilliant. The teaching/support staff and the leadership team were especially encouraging. I wanted so much to do well”

Receiving her final results was an emotional day.

“I was too scared to open it, I felt sick and got hot sweats. My daughter was dancing about saying “just click the link mum”… I’m shouting for my glasses in case I’m seeing it wrong, we were both laughing and crying and hugging. Distinction!! I wanted to freeze this moment, just stop and absorb the enormity of the past six years. My life has changed so much, as have I as a result of my studies. I have a sense of self-worth, and my confidence is sky high.”

Throughout my OU journey, my tutors encouraged, motivated and gave me the confidence and tools to open my mind, question, challenge and rationalise.

“I have a 2:1. I intend to do a Masters, I am sorting out my QTS for English at my school. I have a career plan. Most importantly I’m the first person in my family that has a degree and I have inspired my daughter. This OU journey has been life altering in so many ways, financially, intellectually, but most importantly emotionally. It certainly was not easy, but the things in life worth having aren’t, are they? “