OU News
You are at:Home»Student stories»“The OU gave me the tools to go out and make a difference”

Bradley Neal always had an interest in the natural world and a concern with what was happening to the planet so he decided he was going to try and make a difference, starting with educating himself on the environment and the issues affecting it.

“I have a passion for the natural world. The decline in so many species and habitats demonstrate the ever-clear issues surrounding climate change demand solutions, so I wanted to be able to do something about it. There is a lot of natural beauty in the world and I want to be able experience it as much as possible, as closely as possible and ensure it is there for the next generation.”

Prior to the OU, Bradley’s experience with education wasn’t a particularly positive one and as a result he didn’t ever think he could attain a degree.

School wasn’t the right time for learning for me

“School wasn’t the right time for learning for me. I under-achieved, and while I passed with mostly acceptable grades at GCSE and A-Level I wasn’t motivated enough to put the effort in. I suffered from the inability to push myself over the edge into something unknown—a fear a failure that meant I didn’t even try.”

It was his husband James who first suggested The Open University as he had previously studied a Natural Sciences degree. With James’ support and encouragement, he signed up for an honour’s degree in Environmental Science. 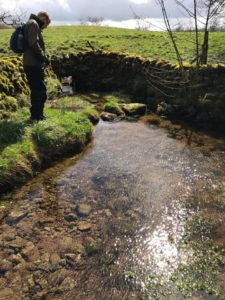 Bradley was working in retail when he first began studying before moving to a local school to work as a Science Technician.  He was then promoted to Senior Technician, which he says was largely down to the fact he was working towards a degree.

While working at the school Bradley spotted the opportunity to use what he was learning on his course to make a direct impact on the school’s environmental plan.

“I was tasked to write a renewable energy feasibility assessment for a client, and I chose to use the school where I work. After doing all the research I decided that it was doable in real life, so I crunched the numbers and presented a plan to the leadership team to persuade them to use solar panels as a way of generating energy for the school.”

To Bradley’s delight the schools Trust approved his plans and they agreed to install solar arrays on both schools as part of a 25 year project saving approximately 3,000 tonnes of CO2 emissions, generating 1.2 mWh of electricity and truly setting an important example for its combined 2,500+ students.

Needless to say that Bradley is extremely proud that he’s used his degree to make a positive and real-life difference to the world.

“The OU gave me the tools to go out and make a difference, and a team of passionate educators allowed me to apply my education in the best possible way – it’s institutions such as these which lead the way in environmentalism”

Having achieved a 2.1 in his degree – something he never thought possible, Bradley is now studying for a post graduate Masters in Conservation Ecology at Oxford Brookes where he hopes to eventually do a PHD and move into conservation work.

Having set out to educate himself and make a difference to the world, it’s clear that Bradley has more than met his goals.