OU News
You are at:Home»Student stories»“Sport was always a part of me – it was in my DNA” 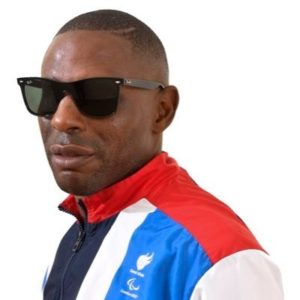 A rare eye disease diagnosed after his first birthday would eventually take Darren Harris’ vision, leaving him completely blind by the time he reached his 20s. But while his sight gradually deteriorated over the years, the dual Paralympian’s ambition to succeed always burned bright.

The OU psychology graduate who loved sports from an early age spent his formative years in the 1970s getting told off by his mum for playing football in the house.

“I used to knock over vases in the living room and kick the ball against the window,” Darren says.

From kickabouts to playing for England

After going to boarding school in Worcester, Darren went to Sheffield University to study maths. Once graduated, he got an IT job, using his evenings to train at the gym and playing football at weekends in a national league for blind players, where he was discovered by then England coach Tony Larkin.

Darren made his England debut in 1996, becoming captain of the team in 2002, and won medals in six consecutive European Championships. He later helped Great Britain qualify for the 2008 Beijing Paralympics, before switching to judo having lost faith in how blind football was run by the governing body.

The Wolverhampton-born Paralympian would return to football, representing Team GB at London 2012, but the intervening years saw him focus on judo. Having taken up the sport while at school, Darren gained his black belt in 2001. He trained under Russian judo coach Valeriy Vostrikov from 2004 and competed in the discipline at the Beijing Games.

A first-round defeat to eventual Paralympic bronze medallist Victor Sanchez was a huge blow, but it forced him to think about life after sports.

“After Beijing, I didn’t know if I was going to carry on with sports,” he says. “I thought psychology was something I could do while training.”

Before the games, all Team GB members competing in Beijing were given access to a sports psychologist. Darren was initially cynical when speaking to performance psychologist Pete Lindsay (who later worked with Manchester City) for the first time, but felt completely different after their 30-minute session.

Discovering the power of psychology

“I was sceptical about it – I’d always worked on my physical fitness and technical ability but didn’t pay much attention to the psychology side of things,” Darren recalls. “I asked Pete if he could guarantee me a gold medal and he said no. I said, ‘What’s the point in speaking to you, then?’

“From there, we talked about my background and I mentioned I’d studied maths, to which he said I was someone who needed a high burden of proof. Maths is a subject where everything is absolute – something’s either right or wrong, whereas psychology is more nuanced. I came away from that chat wanting to know more.”

Following the Beijing Games, Darren signed up for a conversion course – an intensive post-graduate programme in a subject that your degree or professional career hasn’t prepared you for – with the OU to study psychology. He spent the next five years studying in the evenings and at weekends while continuing his sports training.

“Studying and training at the same time was challenging, but I enjoyed it,” Darren says. “When you do just one thing – train, eat, sleep and repeat – you lose your connection with reality; I always found study a refreshing break from all that.”

Darren adds that studying psychology helped him to better understand his character traits and personality. “I could see how some of the things I’d learnt applied to my life, especially my childhood. When reading about attachment theory, I understood how growing up without a dad and my relationship with my mother had a really profound effect on my life.”

The experience of studying with the OU compared to doing a degree in the 1990s was “revolutionary”, according to Darren. “I did maths at a redbrick university; there were no braille textbooks and hardly anyone had a computer,” he says.

How the OU helped me study

When studying with the OU, Darren had access to a range of services including audio and video recordings, DVDs, a student support team and digital talking books. He finished his psychology course in 2013 and was awarded an Honorary Doctorate the following year for outstanding public service, for his charitable work with organisations such as The Dame Kelly Holmes Trust, the Childhood Eye Cancer Trust and The Albion Foundation.

In 2019, Darren retired from sports after winning 10 world and European medals for football and judo. He made 162 appearances for England (34 as captain), making him the national team’s most capped player, and scored 34 goals.

Darren is now an author, peak performance coach, motivational and after-dinner speaker, awards presenter and psychologist, marking the latest chapter in a remarkable story that began with a young boy kicking a football round his mum’s living room.

About studying psychology at The Open University

Rob Morris is a journalist and comms expert with nearly 18 years’ experience. From 2007-11, he worked in Dubai as a features writer, editor and copywriter. More recently, Rob has worked in content marketing and communications. Away from work, he enjoys watching football, Netflix and his two young children causing chaos.