OU News
You are at:Home»Student stories»OU was ‘a natural choice’ for former professional cricketer Adrian Rollins 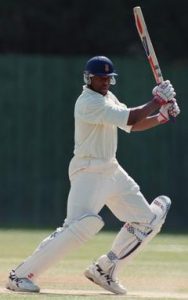 With two double centuries, more than fifty 50s and fifteen 100s scored and a total of 9,000 runs in all his cricket appearances, professional cricket player Adrian Rollins was at the height of his career when a sudden injury changed everything.  Fielding close to the wicket for Northamptonshire, Adrian took a catch diving forward with one hand and broke his wrist badly, resulting in him retiring from the game in 2003.

He said: “Ultimately, with my cricket career over, I needed to restart my life in a direction that I was passionate about…and that is education.”

OU was a natural choice

46-year-old Adrian had already been thinking about life after sport, and was already underway with his OU studies.  He’d previously only studied up to A-Level but had been supported to take on Higher Education by the Professional Cricketers Association.

The OU was a natural choice as Adrian had already seen first-hand what a powerful impact OU degrees could have, as his mother Marva had completed an OU qualification and completely changed career to become an inspirational headteacher. He said:

“My mother has been an inspiration my whole life – she is an incredible woman and I owe everything to her. Taking a course through the OU was a no-brainer for me because I was both influenced and inspired by my mother’s journey.”

A father of three teenage children, unfortunately Adrian’s relationship broke down whilst he was in the midst of studying. Family law proceedings ensued which at times made studying very tough, and he’s now a single parent with joint custody of his three children.

Adrian says: “In challenging times, my exams were impacted which had a knock-on effect for my degree outcome. However, I achieved an Honours degree which I was happy about. Thinking about my kids stopped me from giving up – they needed to see their Father working hard for them at what was a very difficult period.” 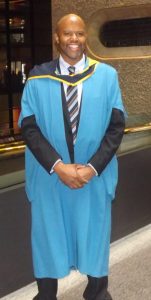 Adrian had initially signed up for a degree in Childhood and Youth Studies but soon discovered a love for mathematics; and switched his path to work towards a BSc (Hons) Open degree. The flexible nature of this degree allowed him to build in maths modules to make up over 50% of the content – which meant he could look into a career as a maths teacher.  Adrian completed his degree in 2007, picking up two certificates and a diploma along the way too!

But it certainly wasn’t easy – after leaving cricket Adrian was working full-time as an unqualified teacher whilst studying.  He says: “It was tough but I kept to a strict regime where I would finish school, get my marking and planning done, go home and sleep (8pm – 2am) and then get up to study until 6.30am when I would get ready for work.  On weekends where I did not have my children, I would book a hotel for a weekend and study with my phones off.  I would take the odd day or weekend off to catch up with friends – but sacrifices had to be made.”

Adrian took on many teaching roles around maths and PE and is now Deputy Headteacher at a secondary school in Derby. He says: “Without my qualifications I would not have been able to enter the teaching profession. I went on to complete my Masters of the Arts in Education in 2012, which has proven very useful in my career.”

“Someone has done this before so why can’t I?”

Adrian was impressed with the teaching materials and support the OU study experience offered.  “My tutors were brilliant – very supportive and understanding. I had the odd extension or two for my TMAs which were invaluable in more difficult periods.”

He also enjoyed the camaraderie built with his fellow OU students, and has some advice for those considering OU study:

“I like to test myself, so I would think to myself, ‘someone else has done this before so why can’t I?’ and that certainly helped.  I would say to anyone thinking of the OU, go for it! What have you got to lose? Pace yourself, start slow and when your confidence builds, go a little harder. The course will change your life for the better, and the time will pass quicker than you believe.”