OU News
You are at:Home»Student stories»‘I’m giving back to other disabled veterans thanks to an OU scholarship’

Veteran Roger Lees spent his military career literally putting his life on the line to protect others. So when the constant strain of combat missions left him unable to serve, he was left feeling lost and unsure what his future would hold.

With the support of an Open University scholarship, Roger originally from Birmingham, now living in Blackwood in Wales, is rebuilding his life outside of the military and using his qualification to help other disabled veterans create positive futures. He shares his story so far:

“I joined the Territorial Army as soon as a I could,” explains Roger. “I had a very difficult childhood and left home aged just 14. So I very quickly had to learn how to cope on my own.” 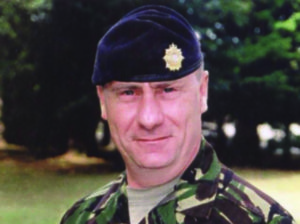 Roger pictured during his military service

Roger went onto serve in the Royal Pioneer Corps, working in volatile combat zones around the world. He rose to the rank of Colour Sergeant and was selected for hostile protection services for the Foreign and Commonwealth Office.

It was a role that would see him face life-threatening danger on a daily basis. After decades of demonstrating courage and resilience in the most dangerous conditions, Roger’s health began to suffer.

Putting his life on the line

“During my time in combat zones, I was involved in 123 small arms contacts and was ‘blown up’ by improvised explosive devices (IEDs) on 11 separate occasions.

“I pretty much spent my entire military service in the firing line, so to speak. It was probably little wonder that I therefore developed what we in the military call ‘combat trauma’ – or PTSD (post-traumatic stress disorder) as it’s known in the civilian world.”

After 34 years of service, Roger was discharged from the military and was faced with the shock of leaving behind the only world he knew.

“I felt pretty lost. It had been my entire life and I had thoroughly enjoyed it and the comradeship that came with it. So it’s fair to say that I found it very hard to adapt back into civilian life and I didn’t really know what to do with myself. I went through various therapy for PTSD, but the trauma never really leaves you. How can it?”

Continuing to give back to others

“I wanted to give back in some way and help other veterans, so I got involved with the Change Step charity here in Wales. It’s a great organisation and is all about offering support to veterans and their families and carers. Much of this involves helping them access support services, especially for those experiencing trauma and stress-related issues.

“I started to do veteran to veteran mentoring, seeing people in person on a one-to-one basis and I quickly found veterans could relate easily to me as we had shared experiences and they can respect that. I also speak to them on the same level in military terms, which they respond to, rather than a ‘touchy feely’ approach which just doesn’t work after what many of them have been through.

“It’s not often spoken about, but many disabled veterans who find it really hard to adapt to civilian life end up with broken marriages or turn to drugs and alcohol.”

Starting a new chapter with the OU 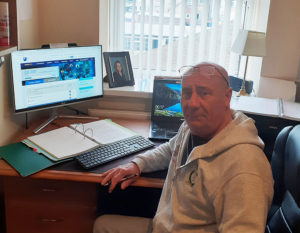 Roger studying for his OU degree at home

In 2020, Roger was deservedly awarded a prestigious silver Welsh Veterans Awards Certificate for his selfless work in helping other veterans. With a new-found purpose, his friends suggested the OU could help Roger boost his skills even further.

“I didn’t think I’d be considered as I’ve never been academic, but I needed that second chance to build something worthwhile for the rest of my life, so I applied to the OU’s Disabled Veterans’ Scholarships Fund.”

The Scholarships Fund was specially created by the OU to fully support disabled veterans injured in or due to service as they transition to civilian life. It enables brave veterans like Roger to benefit from free education and wraparound disability and careers support so they can find a new path in life and rewrite their futures.

“I was absolutely elated when I got accepted and can’t tell you how immensely grateful I am to the OU. I won’t lie, the studying can be hard. I’m studying for a BSc in Psychology and have just started my second year where I’m focusing on therapy. The OU give you great support and I’m really enjoying it. It’s already helping me a lot with my ongoing work with Change Step.

“My message to the OU’s donors is that my gratitude is immense and please keep donating so that others can benefit too.”

You can help more disabled veterans to rewrite their futures

Scholarships are only possible due to the incredible generosity of the OU family. As part of this week’s Big Give fundraising challenge, until midday on Tuesday 7th December, all donations to the OU’s Disabled Veterans’ Scholarships Fund will be doubled – so every gift goes twice as far.

To learn more about OU scholarships and why brave servicemen and women deserve a second chance to change their lives, visit the OU’s Big Give page.