OU News
You are at:Home»Student stories»‘I want to inspire future generations, like the OU did for me’

When Hadiyyah Matsell started her OU journey she was a single mum with a love of science but no means of achieving her goal. After deciding ‘it’s now or never’, she began studying with the OU and life has never been the same.

Hadiyyah recently graduated with BSc (Hons) Degree in Natural Sciences and has started a new career training as a science teacher. She now hopes to encourage many more girls into STEM. In her own words, this is Hadiyyah’s story:

“I’d always loved physics but being over an hour from my closest university meant logistically I couldn’t attend, especially with no income, no childcare and no finished A Levels. I never got my A levels because I had my first child when I was 17.

So I’m originally from Bradford. I met my ex-husband, had my kids and moved down here to Norfolk with him. We had a house in a tiny little village. It was very rural; there was no public transport.

Then at 21 I found myself as a single parent, and still 200 miles from any family or friends, with my two boys aged three years, and just six months old. I was so poor. I was all on my own. And I had tiny children.

University had always been my goal and I’d been thinking about restarting my A Levels for a while. But I kept thinking, ‘Not right now, not right now, it’s just not the right time.’ I didn’t have any support; I didn’t have a way to get to college or university or anything.

And then when I was on my own one night, and I thought, ‘You know, if I don’t do it now, I’m never going to.’ There’s never a right time, is there? There’s always going to be something that’s difficult. So I thought, ‘I’ll just do it now.’

Then I found the OU and discovered I could enrol for my course without A Levels. And that was it. I began the OU physics degree and just fell in love. The tutors were fantastic and the resources were pitched perfectly.

I was a single parent for the first four years of my degree. I know my family worried about how I’d cope with childcare, but the flexibility and the support that the OU provided meant I really enjoyed studying.

‘The OU was so flexible’ 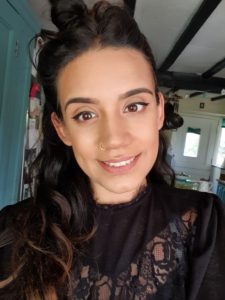 Then I remarried and we moved in together. Six months later I became pregnant with twins, but carried on my studies.

The OU was so flexible regarding my exams. First of all I was able to defer because it was a difficult pregnancy. Then I took two of my exams at home, in quantum physics and astrophysics, when my babies were just eight weeks old. Because I was breastfeeding them the OU let me have an hour’s break in the middle of my exams to feed them.

‘Support and understanding from my tutors meant I could succeed’

The pandemic hit while I was in my final year, trying to complete my research project and an astronomy module. My children were now nine and six and the twins were six months old, and then I began home schooling my older boys.

The support and understanding from my tutors was so appreciated and meant I could succeed. I was given a six-month extension for my research project, and so my children were ten and seven and the twins were one and a half when I made my final submission.

All the procedures put in place during the pandemic were wonderful. How the remote exams were done was particularly useful in my opinion.

I look back and I think I was about 21 when I started and I had no money. I was all on my own with tiny children.

And now I think, I’ve got a career! I’ve really achieved something. So that’s nice. The OU really has changed my life.

I’m hoping to inspire and give confidence to future generations, like the OU did for me.”