OU News
You are at:Home»Business and law»Law»“I took my refugee status as an opportunity” – Shabnam’s inspiring story

“I took my refugee status as an opportunity, not a disadvantage,” says Shabnam Nasimi, 28, who was just eight years old when her parents, fearful of the wrath of the Taliban, abandoned their belongings and made the perilous journey across Europe.

The family settled in the UK and her father Dr. Nooralhaq Nasimi, went on to found the Afghanistan and Central Asian Association, a charity that provides education and support to recent immigrants to the UK. It was this that inspired a young Shabnam to later volunteer and work to support marginalised communities; she opted to study law with The Open University to continue her path. Shabnam has just been named in the top ten most inspirational women in Public Affairs in 2019.

Leaving Afghanistan in 1999, her academic parents feared persecution but also knew the opportunities for their children were limited in such an oppressive regime. 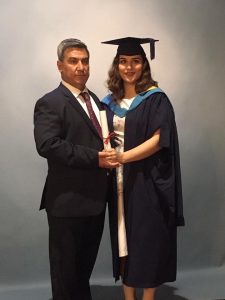 Shabnam and her father on her graduation day

“My parents were academics,” says Shabnam. “My father had completed his PhD in Law and my mother also studied Masters in Law. They knew their security was at risk. Anyone with connections with an academic background was under threat – they decided it was best to leave.”

Coming to the UK, none of the family spoke English and the situation was extremely daunting with a new society and culture to adapt to.  After two years, Shabnam’s father had seen the gap in support for refugees and asylum seekers and he decided set up a charitable organisation, the Afghanistan and Central Asian Association. The organisation provides support, skills and knowledge to help communities live and prosper in the UK. Over the years the charity grew and expanded its services across London, and in 2018 it was awarded the Queens Award for Voluntary Services, awarded in recognition of its care, service and commitment to supporting marginalised communities in the UK.

Shabnam was inspired by her father’s commitment and motivation.

“Growing up in that environment was motivating. Myself and me three siblings were academically driven and involved in the voluntary sector from a very young age. From the age of 18, informed by our own first-hand experiences, I was involved in designing holistic support for refugees adapting to their new life in the UK”

Deciding on the OU

Doing very well in her A-levels, Shabnam could have opted to go to a mainstream university. But she did not want to leave the voluntary work she was doing at the time on women’s project as she knew the experiences and skills she gained would bring long term benefits. She came across the idea of distance learning with The Open University.

“My parents saw my passion in what I was doing and supported my decision to start with the OU.  The non-conventional way of studying would bring long term benefits to me. I liked that I could study in my own time and had independence to solve difficult tasks myself without distractions.”

“The best thing was if I had any questions my tutors were only a phone call or email away. Law is a difficult and intense subject; having someone on hand made it much better for me. I never felt lost through the OU system, there was always someone willing to help and give guidance.”

Taking six years to complete her degree, Shabnam’s friends who opted for traditional universities were graduating ahead of her.

“It was challenging seeing them complete their degrees. But, many of them had more debt and were unemployed for a while or not working in the areas they wanted to. I was still going but had already gained much more work experience. Some were confused as to why I had chosen the OU, many people think it is for older people, but when I explained what else I was doing alongside study, they were really impressed.”

“It was difficult to balance work and study. I didn’t have a social life for a while, and I would work into the early hours sometimes. It was a lot to juggle – but I wouldn’t be where I am if I hadn’t done both. The fact I could arrange my timetable based on my own schedule meant I could manage it.”

Part way through studying, Shabnam got a job for a local MP working as a Caseworker, the first point of contact for local constituents. She started using her new legal knowledge to deal with constituents’ enquiries to resolve constituency and parliamentary policy issues.

“When I first started with the OU I thought I would go on to practise Law, but as I went through the degree I realised I wanted to use my skills in a different way, to represent marginalised people.”

She has now moved into local government to implement the Prevent element of the Government’s Counter Terrorism Strategy at a local level, helping to educate safeguarding professionals and raise awareness of the threat posed by radicalisation to local communities. “I was interested in how the Prevent Strategy responds to the ideological challenge faced from terrorism and aspects of extremism. With a refugee background, I was able to use my experience to raise awareness that individuals from diverse backgrounds can be British and express their identity and religion openly, it’s what makes Britain.”

Shabnam completed her OU degree in 2016 and has since gone on to complete a Masters in International Security & Global Governance from Birkbeck University. 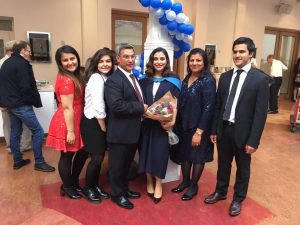 Shabnam also continues to volunteer, mentoring women who need support and guidance, and who are in vulnerable situations. These include refugees, domestic abuse victims, those lacking confidence or who have been discriminated against. She is using her professional experience to help guide them into training and work, to help them access services, or just to be a listening ear.  Shabnam is also an Ambassador for the 50:50 Parliament campaign to get more women into political life; and this could be something she does herself in years to come.

“I am passionate to get more women to understand that politics does concern them. Starting from a young age volunteering, just like public life, it was about listening, giving and representing people who can’t speak for themselves. That passion and the reward of helping others has moved me towards the ambition to go into politics myself.”

“Coming here at age eight, after twenty years of hard work and study, I am really proud of who I have become. Britain is a nation where, by and large, there is opportunity, where hard work pays off, where help is often at hand, where, even if you have a rough start, you can make up ground”.