OU News
You are at:Home»Student stories»‘I nearly quit my degree – then I read letters from my past self’

For graduate Tayla Rickett, the motto ‘If at first you don’t succeed, try and try again’ is exactly why she’s where she is today – starting her PGCE in Secondary Mathematics, ready to qualify as a teacher in 2022.

After two attempts at university, it was eventually an Open University BSc Open Degree that saw her graduating with first-class honours, 10 years after her first attempt at higher education.

The difference during her third attempt? When she felt the familiar urge to drop out as she juggled life’s commitments, Tayla had another tool to draw on – a series of letters she’d penned to herself in preparation for an inevitable moment like this.

A bumpy journey to higher education

Tayla joined a brick university at the age of 18 with dreams of becoming a barrister. But during the second year her family found itself in financial difficulty after a large company – employer to all bar one of her immediate family members – went bust.

“I didn’t think twice about helping my family out of this awful situation,” she said. Tayla ended up dropping out of university so she could work two full-time jobs to support her loved ones. When she tried to reapply the following year, she was told she’d have to repeat her first year and fund it herself, which would have been impossible.

Tayla was working at a law firm and climbing the ladder, so she decided not to pursue her degree at this time. But, several years later when she wanted to change career, she discovered she needed a degree.

“I was trying to get a career in another field but was struggling to find anything that wasn’t entry level without having a degree,” she said. “Not only did the OU allow me to transfer my full credits from my first year, but it also gave me the flexibility to study around my work commitments which was ideal.”

Sadly, Tayla was struggling with anxiety and borderline depression when she began her OU studies.

“I was enduring a constant battle daily with my mind, making me think that I was silly to be changing careers and silly to think I could take on so much work. I basically thought I wasn’t good enough. So, a few months into my course, I deferred.”

Following some self-care, a fresh mindset and a new-found hunger to succeed, by September 2019 she was ready to restart her higher education journey – and determined to succeed. Not even the Covid-19 pandemic would get in the way of her new dream to become a teacher. 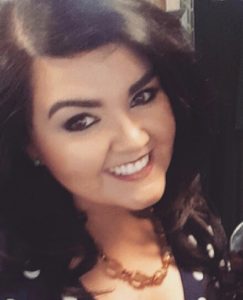 “I was working full time from home due to the pandemic and, like most, I had little separation from home, work and study life. I again found myself in an all too familiar situation where things were getting a little too much.”

Tayla’s supportive family stepped in and picked up some of the household chores, giving her more time to focus on her studies. “An extra hour a day at your desk instead of cooking in the kitchen soon adds up. Those extra hours were like gold dust and were invaluable to me,” she said.

But Tayla also had another tool in her armoury this time, which would help her when the going got tough. She’d written some letters to herself knowing that she may find herself wanting to drop out again.

“Thankfully, the ‘September 2019 me’, knew exactly what I needed to read when the times got rough, the studying got tough and when I felt like I had nothing more to give,” she said.

“So this time, I referred to the letters I had written to myself to help me when I needed it most. I had written in my letters that whenever I had deferred my studying, I felt I’d let myself down. I’d written that not having a degree was preventing me from taking the next steps in my career, and about how I was being disregarded for roles I was certain I was capable of. And I’d written that I wasn’t fulfilling my potential.

“I wrote these letters because of my rocky past when it came to my degree attempts. I wanted to be able to read them when I was ready to give up. I know myself better than anyone else and I knew I was the only person who could stop that feeling in the pit of my stomach. I knew I was the only one who could talk myself down when I was spiralling, mentally. And it worked.”

Tayla knew that to become a teacher she needed a 2:2 classification in any degree so that she could do her PGCE and become a teacher. But she exceeded those goals, walking away with a First in 2021.

She said: “With a little bit of determination and hard work, I kept my head down and managed to see my final year through.

“Finally, 10 years after I took a first swing at starting a law degree, I achieved a first-class degree – something I had only dreamed about for the past decade. To say that I am proud of myself is a huge understatement.

“After dropping out of university twice, I had closed the door on my education. I thought it wasn’t meant to be. But if at first you don’t succeed, try and try again. I have changed my career and life for the better, thanks to The Open University.”

Inspired by Tayla’s story? Ready to follow your own ambitions? Study with us and you’ll be joining over 2 million students who’ve achieved their career and personal goals with The Open University. Find a distance and online course that’s perfect for you.