OU News
You are at:Home»Student stories»From the Navy to a new career in law

For veteran Brian Playfair, life hasn’t always been easy. After 13 years of saving lives in the Royal Navy, Brian was medically discharged and faced a series of devastating blows – including the stillbirth of his son, and his other son being diagnosed with leukaemia.

Despite going through the toughest of times, Brian can now see the ‘light at the end of the tunnel’ and is proudly working towards a new career in Law through The Open University.

Currently a full-time retail manager, Brian, 41, has plans to unlock a new career and believes the world is now his oyster.

“My OU study has allowed me to realise that I am capable of so much more than I thought I was,” he said. “I aim to achieve a new career and skills such as research, improved concentration, time management.

“Being a lawyer or barrister was one of those jobs that I could never see myself doing before, I wasn’t smart enough and I don’t walk in those circles. But now I’m on my third module having passed the first two with first-class results, and I am the Chair of the Open University Law Society. My goal is to become a lawyer specialising in either criminal law or clinical negligence.

“I feel very strongly that the OU has played a big part in me being in this position. It’s given me the confidence to grow and learn, and it’s helping me realise a dream – all from the comfort of my couch.”

Brian says his experiences as a war medic, which included six months in Afghanistan, left him traumatised.

“I treated serious casualties – mostly amputees – on a daily basis, sometimes three or four times a day,” he said. “Like many before me, I came back with some struggles. I’d be walking through town with my wife and I would suddenly hear a siren that was identical to the air raid siren in Camp Bastion – the same siren I’d heard when we came under fire from Taliban firing into the camp. I also developed an anger issue back home. I was surrounded by people that were moaning about such trivial things in comparison to what we’d seen, and I felt that they didn’t have a clue.”

In 2014, Brian faced more anguish when his son was sadly stillborn.

“This was to be the beginning of the end of my career and the start of a new journey for me. Ten months after losing our baby, it hit me and I ended up being diagnosed with PTSD and severe depression,” he said.

He underwent a year of treatment but – two weeks after he was medically discharged in 2016 – his other son, who was just 10 months old at the time, was diagnosed with leukaemia.

“My little boy nearly died several times in the initial few weeks after diagnosis,” said Brian. “Thankfully, after nine months in hospital, three rounds of chemotherapy and a bone marrow transplant, he made it.”

With his son now seven – and doing brilliantly – Brian now feels his life has turned around and he’s looking to the future.

“There’s light at the end of the tunnel,” he said. 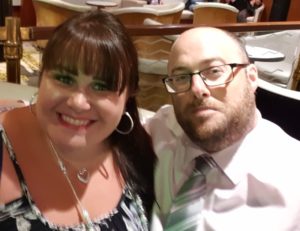 Brian and his wife

As a father of two with bills to pay and a full-time job as a retail manager, it was the flexibility and support on offer that attracted Brian to the OU. He viewed his first module as a ‘taste test’ – but it turned out that he loved it.

“Supported distance learning is enjoyable but it takes a lot of determination, organisation and focus.

“But you push through your first module and prove to yourself that you can do it.

“I find inspiration and drive from articles and exercises related to criminal law. I read about justice being upheld and it inspires me to be a part of that process,” he added.

“But really, I only need to look at my wife and kids and that gives me all the motivation I need to keep going.”

For Brian, who had previously struggled with education, the OU has given him the chance to discover and show what he’s really capable of – and he says he’d recommend it to anyone.

“OU study has changed my life for the better,” he said. “It has allowed me to prove to myself and others what I am capable of and offered me the chance of a great career in the future.

“I would recommend OU study to anyone. I’d suggest that they look at their daily and weekly routine to plan out when they can study. I’d also say to stay focused and remember their ‘why’.

“I would certainly consider further study with the OU myself. I strongly believe that studying with the OU shows great personal qualities to future employers.”