OU News
You are at:Home»Student stories»Finding a new purpose after the Forces

Stuart Lawson had served in the Army for 19 years when a terrible accident turned his world upside down. It was while undergoing gruelling rehabilitation that Stuart set himself a new goal to work towards – becoming a History teacher.

With the help of an Open University scholarship for disabled veterans, Stuart is now on his way to making his dream a reality. He shares his story so far:

“I had served on two tours of Iraq and one of Afghanistan,” explains Stuart. “The accident happened while I was on a training exercise with the Royal Tank Regiment. We had a breach explosion inside the tank and the two friends who were beside me were killed instantly.

“I was very lucky to be the sole survivor but was so badly wounded that it was touch-and-go as to whether I would make it through.”

Stuart suffered extreme burns and lost an ear and several fingers. His injuries were so severe that he spent five weeks in a coma and would need two years of demanding rehabilitation.

Unlocking a new career and purpose 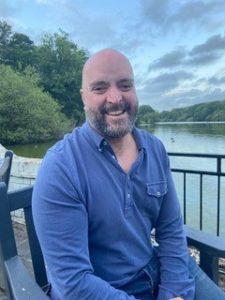 In January 2020, three years after the accident, Stuart was medically discharged from the Army and had to leave behind the only world he knew.

“The career I loved had been brought to a sudden halt. The military was my life,” he said. “I was distraught and felt my life was meaningless.”

It was during his ongoing rehab that Stuart found a glimmer of hope. A marine mentioned The Open University’s Disabled Veterans’ Scholarships Fund, which offers veterans like Stuart fully funded qualifications and ongoing disability support.

The idea for a new career and a new purpose was born.

“I had never been academic, didn’t enjoy my schooling and so I thought I didn’t stand a chance of being accepted for a scholarship,” he said.

To his delight, Stuart was welcomed to the OU and began studying for a BA (Hons) History degree in 2019.

“When the OU awarded me a scholarship, I just thought ‘Wow!’, I was so happy. It gave me a purpose,” he said.

“I really enjoy history, so my goal is to study towards becoming a history teacher. It’s a big goal, but I know I can do it.”

As an OU student, Stuart can access a range of student support services, including individual disability support and adapted materials to ensure he has the resources needed to succeed.

“I still suffer from PTSD (post-traumatic stress disorder) from my horrific accident and suffer from anxiety,” said Stuart. “I also still react to loud noises. But the OU has been really supportive in all this.”

Giving back to others

What keeps Stuart motivated is the opportunity to give back to others.

“I just want to give back by inspiring future generations of kids by sharing my love of history with them,” he said.

“I want to send a huge thank you to the OU’s alumni and donors for giving me a chance to not just change my own life, but also to help educate and inspire my pupils of the future.”

Scholarships like Stuart’s are only made possible thanks to the generous support of donors and supporters of the OU. You can help more people like Stuart access higher education by joining us for the OU’s Giving Day – a 36-hour challenge starting at 9am 7th July to raise funds for scholarships and bursaries that will transform lives and rewrite futures.