“I get really emotive about an issue and it inspires me to write about it,” says British Palestinian author Shereen Malherbe, who made her writing dream come true while studying for an English Literature and Creative Writing degree with The Open University.

Shereen published her debut novel while studying part-time and used the chapters she developed in her final modules to land a book deal for her second. By the time she graduated in 2019, Shereen had two novels under her belt, a contract for a children’s book series and was already working on her third novel – a story inspired by classic gothic English literature but set in Palestine – which is soon to be published by Beacon Books.

“When I was a young writer, I would spend time finding information on the internet to help me write,” says Shereen. “The advice out there, although well intentioned, can often be conflicting so the structure of my degree helped enormously.

“And I still use the OU books on Creative Writing. I take them everywhere with me, they’re a key source for my work. If I get stuck on a certain aspect of the writing or novel construction, I revisit them to help me to get back on track.”

Now that her dreams of being a published author have come true, Shereen is determined to keep using her voice to tell stories from different perspectives and to inspire budding writers to tell their own:

“One of my writing tips is to do what you’re passionate about and be unique. When you’re young, you can be very easily influenced of what the [publishing]industry wants and what the market is publishing and what you think people want to read. For me, it’s not about that. It’s about what you think is important to tell and then you tell it. Everyone has a unique perspective. So use that and it will give you a unique edge. 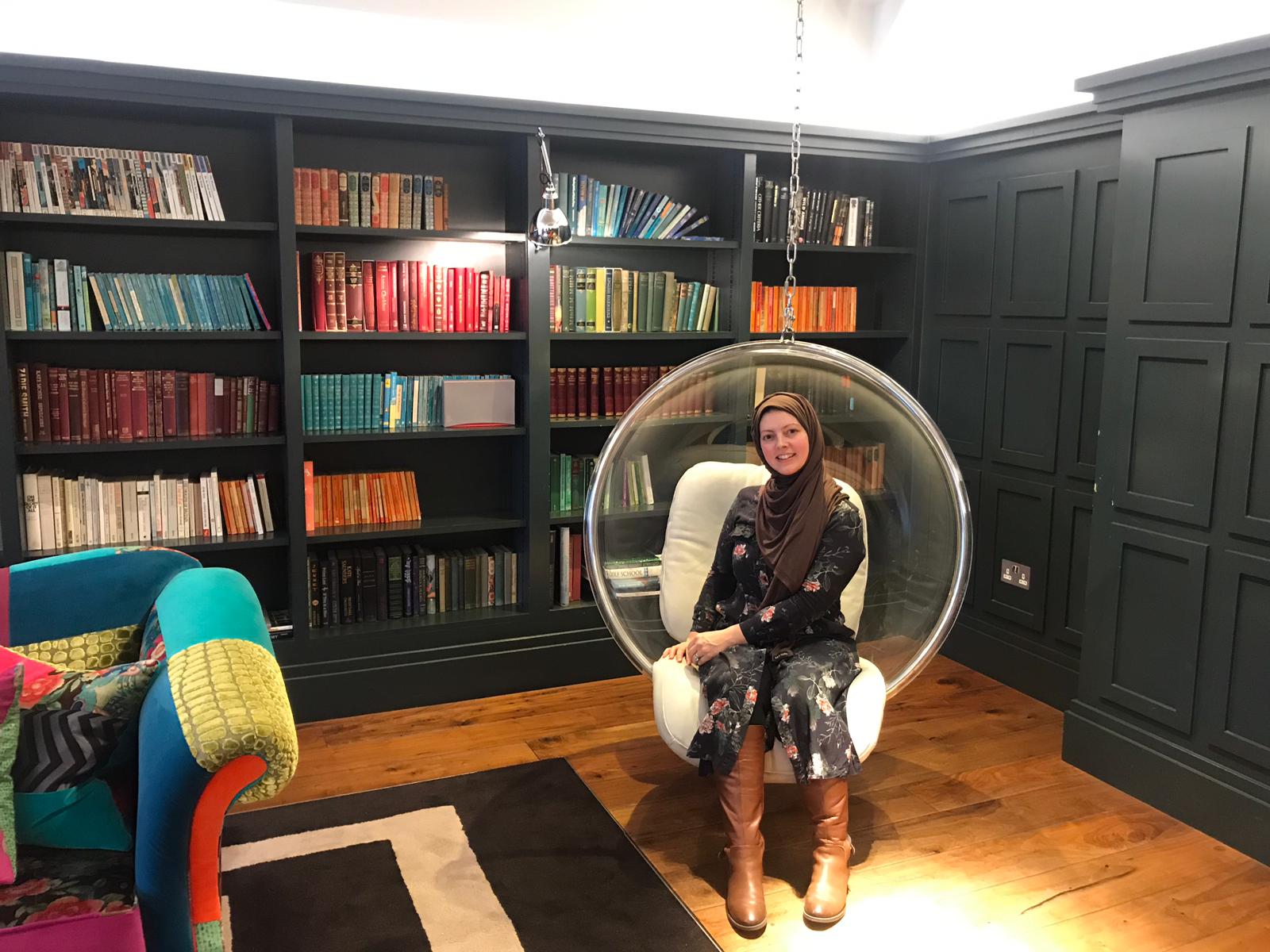 “I’m really grateful for the platform and I feel like I have a responsibility now. I stick to the reason that inspires me to write and that is to reframe perspectives. If I can move people emotionally then that’s the new dream: that my writing introduces people to new perspectives, or I reach people who wouldn’t necessarily read [stories from different cultures]. I want to inspire a new generation to write things that are authentic and real to them. Because I don’t want people to not value the importance of what they contribute to society.”

Shereen uses her experiences of growing up in Britain and living in the Middle East to create novels that straddle both the West and the East. She was inspired by travelling to Palestine to visit family to write Jasmine Falling, which was quickly named one of the top 20 Best Books by Muslim Women by Goodreads.com readers. Though she has received positive feedback from readers around the world, Shereen admits that she was initially worried when a literary agent suggested she change her main character to no longer be Palestinian:

“At the time I thought I was doing something fundamentally wrong, but when I did my degree and learnt more about Orientalism it made me realise that I had to carry on what I was doing. When you’re a new writer you are so nervous, it’s inevitable that negative feedback could disrupt new writers because they might not feel like their feelings are valid. When you are making art or writing I think it’s really important that writers appreciate the value they can add.

“If we want to keep pushing the boundaries and making people consider things, art is such a great avenue for that. Art and literature help to bridge the gap. You can easily go and get a book on the Palestine-Israeli conflict but are you going to? Probably not. But if you love reading, you can read Jasmine Falling in a couple of days and it’ll give you a different perspective but it’s also quite emotional because it is fiction, so you can hit all of those different reader expectations, but they’re learning something along the way.”

Celebrating who you are

Using fiction to help educate and inspire is also a theme in Shereen’s latest children’s book series, ‘The Girl Who…’, which is told from a young migrant’s perspective. She initially had the idea as she wrote it for her children when they moved from the Middle East back to the UK:

“What I wanted to do is to say, ‘You don’t have to hide, it’s a good thing to celebrate that you’re from somewhere different’. Sharing stories has always been a way to teach other people and also let them learn about it, and also to revisit homelands. How many times have characters like in The Chronicles of Narnia, gone into a cupboard and they’re in a different world? So the themes of both revisiting homelands and sharing stories is what we’re doing in the migrant children’s series. 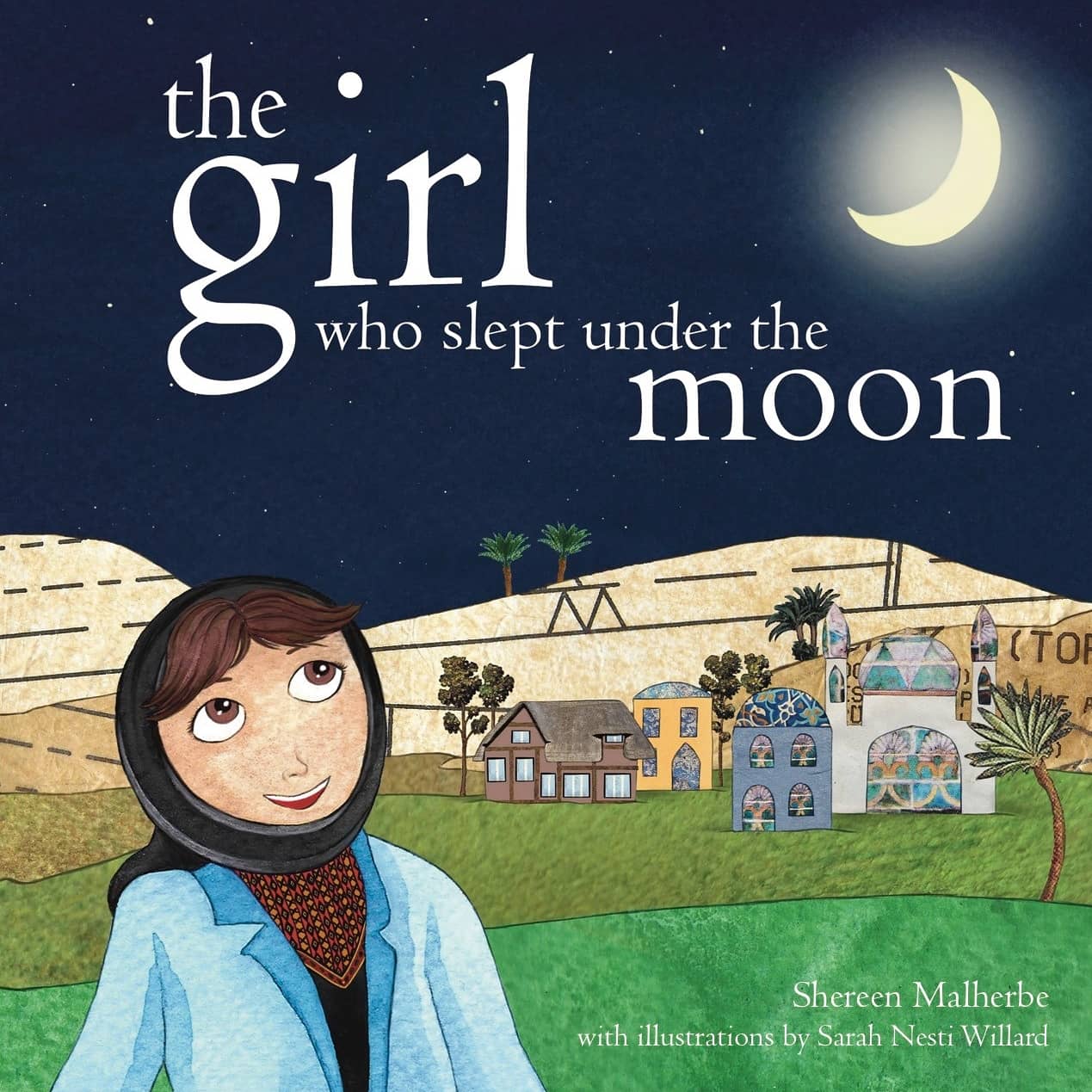 Shereen’s latest book, The girl who slept under the moon

“When I last researched, UNICEF placed the number of international migrants in 2020 at 281 million; 36 million of them children. It’s a huge amount of global movement, we have literally never seen this much movement before and instead of being something people have negative connotations about, I wanted to look about how they can celebrate and be confident of their differences and share that with children around them. Then as an author when you have feedback where people have connected to the book and said, ‘That’s exactly what happened to me’, it reinforces the importance of books and the impact they have.”

Find what motivates you

Shereen worked with her Open University tutor to develop her second novel, The Tower, which focuses on a Syrian refugee living in a London tower block. Since publishing in 2019, it received academic praise and been added to a required reading list in an American university. Shereen says that knowing her book is being used to spark important discussions is encouraging – not just for her but other writers:

“It’s good as it shows that institutions want to discuss these issues. I think it’s really encouraging for diverse writers because it’s saying ‘Write, be passionate about what you’re doing, and you never know where it might end up and what discussions it may open up that ultimately shape our future generations.’”

You can learn more about Shereen and her writing at https://shereenmalherbe.com

To find out more about the OU’s English degree visit: http://www.open.ac.uk/courses/english