OU News
You are at:Home»Science, maths, computing and technology»Space»Sniffing out life on Mars: mid-cruise check-out (and it’s 1-0 to England)

Data is currently being received and reviewed from the ExoMars Mission – the launch of a spacecraft in March to demonstrate Europe’s first ever landing on Mars later this year, and an attempt to sniff out signs of life on the Red Planet. The ExoMars Orbiter is carrying an instrument with significant OU involvement which will hunt for methane gas emissions and which could signal the presence of life-forms in Mars’ past.

Here, during what’s known as the mid-cruise check-out – a half way health check for the mission – Dr Manish Patel explains what the ExoMars mission is, using a small model of the spacecraft, and why friendly banter between colleagues in Belgium mean it’s 1-0 to England…

The European Space Agency’s ExoMars Trace Gas Orbiter (TGO) launched on 14th March, carrying with it the Schiaparelli lander to demonstrate Europe’s first ever landing on Mars later this year.

It lifted-off from Baikonur, Kazakhstan, carrying an instrument called NOMAD ( Nadir and Occultation for Mars Discovery), which is able to ‘sniff out’ trace gases in the atmosphere of Mars to detect whether signs of life exist, the development of which was co-led by academic Dr Manish Patel, an OU Senior Lecturer in Physical Sciences, alongside colleagues in the UK and Belgium. 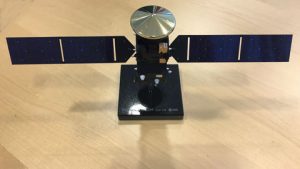 A model of the ExoMars Orbiter. The real version is around 50 times bigger than this one.

This week saw what’s described at the mid-cruise check-out, when data is beamed from the spacecraft to the European Space Agency and sent to teams working at The Open University’s Walton Hall campus in Milton Keynes, and to colleagues from the Belgian Institute for Space Aeronomy, for review.

Sat around a big screen on campus, Dr Patel and his colleagues Dr Jon Mason and Dr Mark Leese from the OU Department of Physical Sciences, are currently analysing the data to review the mission. Colleagues in Belgium are also doing the same. 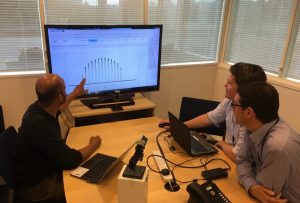 The ExoMars spacecraft is currently on a journey to Mars and the Schiaparelli lander will detach from the TGO spacecraft on 16th October, landing on the surface of Mars on 19th October.

Find out more about the ExoMars Mission.