A team of scientists led by The Open University has discovered evidence of recent glacial meltwater on Mars, despite the widely-held view that the recent climate was too cold for ice to melt. 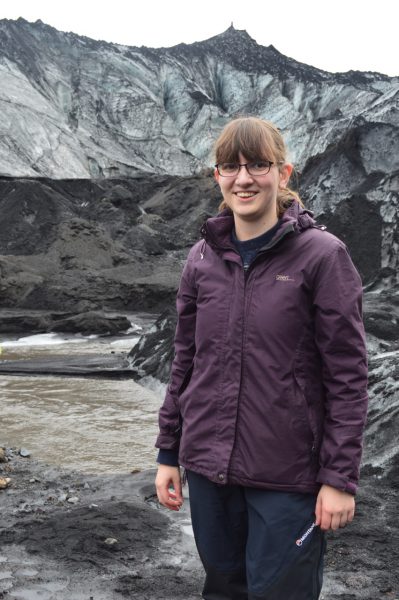 Planetary scientists from the OU, in collaboration with University College Dublin, the University of Cambridge and the University of Nantes (CNRS), have discovered a rare ‘esker’ on Mars – a ridge of sediment deposited by meltwater flowing beneath a glacier in the relatively recent past (about 110 million years ago), despite cold climates. The research has been published in the Journal of Geophysical Research: Planets.

Lead author of the research, PhD Researcher in Planetary Science, Frances Butcher, explains the significance of this discovery.

What are glaciers on Mars like, and where are they?

“Similar to Earth, Mars’ poles are covered in large, solid ice caps, and the equator doesn’t have any surface ice at all. The regions between the equator and the poles have thousands of water-ice glaciers that are similar to those found in mountainous regions on Earth. These ‘mid-latitude’ glaciers are the focus of our study, and are thought to be covered in a blanket of debris, perhaps only metres thick.”

What have scientists thought in the past?

“It is widely thought that glaciers in Mars’ mid-latitudes have always been too cold to have produced meltwater. This is because average temperatures on Mars are a chilly -55°C. However, our research suggests that underground volcanic activity, and heat generated by ice movements, may have caused rare, localised melting of ice beneath some of these mid-latitude glaciers in the past.”

“Basically, the meltwater flowing through a glacier forms a tunnel through the ice, which then fills with sediment such as gravel, rocks, and sand. When the glacier retreats, this sediment is left behind as a ridge, known as an ‘esker’.”

“Whilst there is no evidence that liquid water still exists under these glaciers today, the research gives important insights into environmental conditions that could have caused ice to melt in Mars’ recent geological history.”

What can the esker tell us about environmental conditions on Mars in recent geological history?

“Until now, only one other esker had been discovered emerging from the front of a mid-latitude glacier. Both eskers formed between 110 – 150 million years ago, which is very recent for geologists, and are located in deep rift valleys, which could explain why these specific glaciers produced meltwater despite cold climates on Mars. Similar to some rift valleys on Earth, we think that heat from underground volcanic activity warmed the beds of the glaciers that flow within them, causing ice to melt.”

Why is this important for humans?

“If humans eventually travel to Mars, mid-latitude glaciers would be a relatively accessible source of ice that astronauts could process into water. Eskers could also provide sites of interest for scientific exploration close to these ice resources.”

What about life on Mars? Could these mid-latitude glaciers support life?

“Conditions on Mars are extremely hostile for life, and we currently do not know if life ever existed anywhere on the planet. Therefore it seems unlikely that mid-latitude glaciers support life, or have ever done so. However, in cold, high-radiation environments on Earth, the beds of glaciers can be protective safe-havens for microbial life.

“Glaciers on Mars could, in effect, act like a huge shield, protecting the ground and ice at their beds from the harmful radiation that bombards the surface of the planet. If life did emerge on Mars, there is a chance that the beds of glaciers could have provided sheltered niches for life.”

The research has been published on the Journal of Geophysical Research: Planets.