A large ridge on Mercury, the length of the distance between London and Liverpool, has been named ‘Unity’ after the ship which took Edmond Halley – of Halley’s Comet fame – to the South Atlantic island of St Helena in 1676. The name recently received formal approval from the International Astronomical Union.

Jack Wright, a PhD student in the Department of Physical Sciences at The Open University, mapped the feature on the planet’s surface and proposed the name. Until very recently only half of the planet’s surface had been imaged, making it the least well explored planet in the inner Solar System.  Jack’s geological map covers an area of about five million square kilometres, or half the area of the USA, on the side of the planet imaged for the first time by NASA’s MESSENGER satellite.

Edmond Halley made the voyage to the southern hemisphere in order to map the stars to aid navigation at sea. Whilst on St Helena he observed a transit of Mercury, which passed in front of the Sun as seen from Earth.  Mercury will transit the Sun again on 9 May this year, giving everyone in the UK a chance to see it.  The Open University has released a new video about safe viewing here. 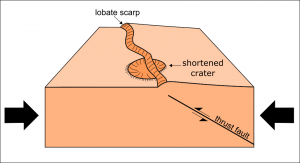 Diagram of a lobate scarpThe large ridge – or ‘lobate scarp’ – that Jack identified is 350 km long and 1.5 km high. Jack commented: “I see Mercury as the ‘problem child of the Solar System’ since so much about the planet defies our expectations and our attempts to study it.  I feel privileged to be studying this complex and fascinating planet and delighted that my suggestion for naming this feature has been accepted. My next task is to examine the scarp in further detail to find out more about the history of this part of Mercury’s surface.”

David Rothery, Professor of Planetary Geosciences, who is leading the Open University’s study of Mercury and has previously had various name suggestions of his own approved  said: “I suggested to Jack that we needed a name for this feature, which is so much more convenient than having to refer to it as ‘the long scarp near the southeast corner of our map’. The convention is that scarps on Mercury are named after ships used on ‘voyages of discovery’, and when Jack dug out the name of the ship that took Halley to St Helena it seemed perfect.”

If you’re interested in learning more about Mercury, watch our series of videos on OpenLearn.

The Open University’s research in Mercury is funded by the Science and Technologies Facilities Council (STFC) and the UK Space Agency. It will help pave the way for the European mission to Mercury, called “BepiColombo”, which is due to launch in 2018.