Scientists from The Open University are among an international team which has discovered a new planet orbiting the closest single star to the Sun. 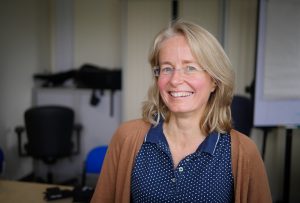 Measurements from high-precision instruments reveal the cold super-Earth around Barnard’s star. This red dwarf star is famous because it moves across the night sky faster than any other. Only the three stars of the Alpha Centauri triple star system are closer to our own Solar System than Barnard’s Star.

The astronomers obtained significant evidence of a planet with mass just over three times the Earth’s mass orbiting the red dwarf star every 233 days. Because red dwarf stars are dimmer than the Sun, the super-Earth is orbiting near the so-called snow-line of the star, where it is likely to be a frozen world.

The planet candidate, named Barnard’s star b (or GJ 699 b), is a super-Earth with at least 3.2 Earth masses. In the absence of an atmosphere, its temperature is likely to be about -150° C, which makes it unlikely that the planet can sustain liquid water on its surface. Current theories of planetary formation predict that the snow-line — the location of the planet Barnard’s star b — is the ideal location for such planets to form. 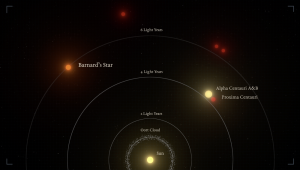 This is the first time astronomers have discovered a cool, probably rocky exoplanet using the so-called radial velocity method. The team used two decades of observations, including recent measurements from the state-of-the-art planet hunting instrument CARMENES, which is based in Calar Alto, Spain.

Barnard’s star is a red dwarf: a cool, low-mass star. The most common type of planet to form around low-mass stars are super-Earths, lending credibility to this newly discovered planetary candidate.

Because it is only six light-years from us, as it orbits around our Milky Way Galaxy, Barnard’s star appears to move across Earth’s night sky faster than any other star. This red-dwarf star, smaller and older than our Sun, is among the least active red dwarfs known and is consequently an ideal target to search for exoplanets with various methods.

Because stellar activity generates energetic X-rays and UV radiation, active stars may prevent life evolving on any orbiting planets. In contrast, old inactive stars like Barnard’s star are more favourable for life. However the researchers find no sign of any planets within the so-called ‘habitable zone’ where temperatures are consistent with liquid water on the planet’s surface.

Since 1997, several instruments have been gathering copious measurements of Barnard’s star’s subtle back-and-forth wobble. An analysis of the data collected up to 2015, including observations from HIRES/Keck, and ESO’s HARPS and UVES spectrometers, suggested the wobble could be caused by a planet with an orbital period of about 230 days. To confirm this, however, more measurements were deemed necessary.

To confirm the planet, the Red Dots team of astronomers regularly monitored Barnard’s star with high precision spectrometers such as CARMENES (Calar Alto Observatory in Spain), and also HARPS and HARPS-N in an international effort  [2]. The radial velocity technique uses the Doppler effect on the light from Barnard’s star [1] to measure how the star moves as a consequence of the gravity of the orbiting planet

For the analysis we used observations from seven different instruments, spanning 20 years, making this one of the largest and most extensive datasets ever used for precise radial velocity studies. The combination of all data led to a total of 771 measurements.

Dr Ribas explained that a clear signal at a period of 233 days arose again in the re-analysis of all the measurements combined. He said: “This signal implies that Barnard’s star is approaching and moving away from us at about 1.2 m/s — approximately the walking speed of a person — and it is best explained by a planet orbiting it.” 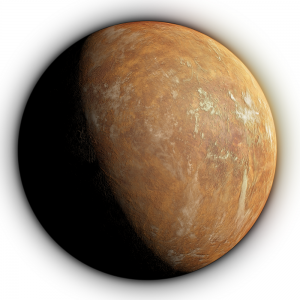 “After a very careful analysis, we are over 99% confident that the planet is there, since this is the model that best fits our observations,” said Ribas.

“However, we must remain cautious and collect more data to nail the case in the future, because natural variations of the stellar brightness resulting from starspots can produce similar effects to the ones detected.”

“We all have worked very hard on this result,” said Guillem Anglada-Escude from Queen Mary University of London and co-leader of this work. “This is the result of a large collaboration organised in the context of the Red Dots project, which is why it has contributions from teams all over the world including semi-professional astronomers coordinated by the AAVSO.”

Unlikely to be habitable

Whilst unlikely to be habitable, because it’s too cold, Barnard’s star b is an excellent target for direct imaging using the next generation of instruments such as NASA’s Wide Field InfraRed Survey Telescope (WFIRST, [3]).

Such low mass exoplanets so distant from their parent star have not been discovered before by the Doppler technique [1]. This means that astronomers are getting better at finding and exploring a relatively new kind of planet outside our Solar System. With the next generation of instruments, these capabilities can only expand.

Prof Carole Haswell, Head of Astronomy at the Open University and co-author of the paper said:

“The planet is over three times more massive than the Earth, so any future explorers will find its stronger gravity make it a physically tiring world to visit.” added Dr John Barnes, Researcher at The Open University, also a co-author of the paper.

“Tantalisingly, super-Earths like Barnard’s star b probably sustain geothermal activity for longer than their lower mass counterparts. This could be helpful to life by providing sustained heat and the chemicals needed to build complex organic molecules.” said Professor Haswell.

“This new discovery offers exciting prospects to learn more about the Galaxy’s diversity of planetary systems, starting with our own Solar System’s near neighbours.”

Artistic impression of a Sunset from Barnard’s star

[2] RedDots is a collaborative observational effort dedicated to searching for the nearest terrestrial planets in warm orbits around the nearest red-dwarf stars to the Sun. The Open University’s Astronomy Discipline are members of the RedDots Collaboration, which is led by QMUL.

[3] WFIRST is a planned NASA mission that will be dedicated to answer cosmological questions, and also enable the detection of very nearby exoplanets with direct imaging. The Open University’s Centre for Electronic Imaging is working on detectors for WFIRST.