OU News
You are at:Home»Science, maths, computing and technology»Space»My three minutes with the first man on the Moon

When you meet the man who took the first “small step” for man on the Moon, it’s not surprisingly an occasion which sticks in your memory. The OU’s Emeritus Professor John Zarnecki had that encounter just over nine years ago and recalls his chat with Apollo 11 astronaut Neil Armstrong: 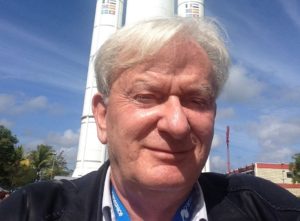 In March 2010 Professor John Zarnecki received an invitation from the Royal Society in London to take part in a very special occasion. Three NASA astronauts had been visiting US troops in Europe and the Middle East and on their way back, they were stopping off in London for an event. The astronauts were Neil Armstrong, Jim Lovell (commander of the ill-fated Apollo 13 mission) and Gene Cernan (the most recent person to have walked on the Moon). Professor Zarnecki recalls that experience.

Dreams of being an astronaut

“I had never really bought into the “astronaut myth” school of thinking, knowing that they were, at least in the early decades of space exploration, to a large degree puppets of their parent agencies, whether Soviet or American – or more recently, Chinese. I had always admired their bravery and their skills and knowledge but there had always for me been some reservations. In fact, I myself was a two times failed astronaut!” 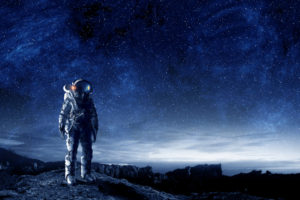 Dreams of being an astronaut

“I had applied to the first European Space Agency call for a European astronaut for the Space Shuttle programme in the late 1970s and had progressed to medical and psychological testing in the UK before having been eliminated. But being a product of the 1960s hippy generation, I had always felt a distance from these (mostly) men who were predominantly a product of the military.

“To return to the event at the Royal Society – the three astronauts gave, to my surprise, separate very polished and genuinely inspiring short talks which were well-attuned to the school children present. I knew, as a University Lecturer, how difficult it is to remain fresh and enthusiastic when giving the same material year after year! These fellows, especially Neil Armstrong, must have given the same talks and in particular responded to the same questions ad nauseam. Yet they came across, especially Armstrong, as still fresh and interested and respectful of their audience. 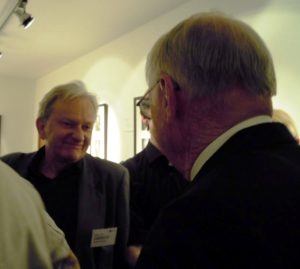 “Immediately after the Q&A session, amidst the genteel tea and biscuits, in the general melee, I was pushed forward to meet Neil Armstrong.

“Somewhat panic-stricken, I dug deep to think of something to say that would not sound banal or hackneyed. I took a risk and introduced myself as the first person to touch the surface of Titan, Saturn’s largest moon – my instrument on the European Huygens Probe had been the first to strike Titan’s surface when Huygens had landed there in January 2005.

“I had no idea how this would be received but Armstrong seemed amused and was quite aware of the NASA/ESA Cassini-Huygens mission. After a minute or so, when that subject was exhausted, I desperately looked for the next topic. I told Neil Armstrong that I had rushed to this event from the Royal Observatory in Greenwich where I had been previously for a meeting – I told him how glad I was that I had made it on time! 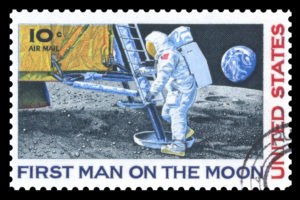 “At the mention of Greenwich, his eyes seemed to light up. He then told me quite enthusiastically that Greenwich was his favourite place in London. He said that he had been there around half a dozen times “unannounced” not in disguise but on his own and without any fanfare. What was it that attracted him there I asked? It was the wonderful Harrison Chronometers, the instruments which had revolutionised navigation in the 18th century.

“He told me that he was so impressed by the technology and engineering and indeed the beauty of these instruments and had never grown tired of viewing them. There was real animation in his voice when he spoke on this subject – even though it was only a brief conversation, I could tell that this was something that really meant so much to him. He was, indeed, at heart an engineer, a technologist or to use the modern vernacular, a geek, who really loved to see how things worked. And then our conversation was over.

“He was of course, besieged by many who wanted to speak to him so he was whisked away to the next person wanting to grab a piece of him. I was left very touched by this man who was so extraordinary and so ordinary – and that is meant to be a great compliment. He had taken time and effort to speak to me amongst so many and I had seen a glimpse of the real man perhaps.

“I certainly left with a very different view of this icon of the 20th century and was indeed saddened when I learnt of his death just over two years later.

I will always feel happy that it was a man such as Neil Armstrong who took that first step.”

For more information about The Open University’s moon research: