OU News
You are at:Home»Science, maths, computing and technology»Science»Lunar samples record impact 4.2 billion years ago that may have formed one of the oldest craters on the Moon

An international team of researchers led by The Open University (OU) has provided the first sample-based evidence, which they argue reflects the age of the Serenitatis Basin – one of the oldest craters on the Moon.

The formation and ages of the lunar basins and craters, created during large collisional impact events during the first ~500 million years of the Solar System history, have fascinated scientists since the earliest observations of the Moon.

Since the earliest observations, the Serenitatis Basin has been thought to be one of the oldest large craters on the near side of the Moon. To determine the exact ages of lunar craters, one of the aims of the Apollo missions was to obtain rock samples, which were believed to have formed during the massive impact events that created such large basins. In particular, the Apollo 17 mission aimed at collecting Serenitatis-related samples.

Previous studies have shown, however, that most of Apollo 17 rock samples were likely created in a much younger impact event, associated with the formation of the Imbrium basin. Imbrium ejecta is dispersed across much of the nearside of the Moon, which has obscured the determination of the true age of the Serenitatis Basin – indicating that it could be ~3.8 – 3.9 billion years old.

The Apollo 17 sample used in this study was provided by NASA, and the new discovery has been realised by a team led from the OU and involving researchers from the University of Portsmouth (UK), Royal Ontario Museum, University of Toronto and Université de Sherbrooke (Canada), Swedish Museum of Natural History (Sweden), and Curtin University (Australia).

Dr. Ana Černok, who initiated this study when she was a Marie Curie Fellow at the OU (currently an Honorary Associate), said:

“We looked at this fascinating sample for a long time and tried to disentangle its complex radiogenic ages. It has been difficult to establish the exact link of the samples to the Serenitatis Basin ever since the Apollo 17 collection was brought back, because it was not easy to discern between samples formed by the Imbrium event and those formed by Serenitatis.”

“The new study highlights the importance of careful sample curation and repeated analysis of well-characterised samples using the latest analytical techniques and methods. In addition, it reveals the immense potential of studying materials at the nanometer scale, which can be of great importance for the future sample return missions, such as those from the asteroid Bennu or from Mars.’’ 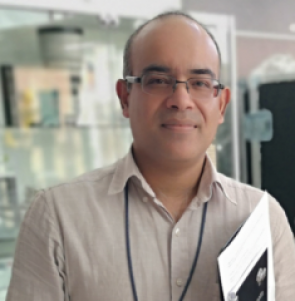 Professor Mahesh Anand, Professor of Planetary Science and Exploration, who is the Principal Investigator of Apollo samples at the OU, added:

“Based on the novel structural observations of phosphates at sub-micrometer scale, combined with very precise age determinations of the exact same phosphate mineral grains, we were able to correlate the 4.2 billion year age to the massive impact event that likely formed the Serenitatis Basin.”

About Space Science and Exploration at the OU

Kat is a Senior Media Relations Manager at The Open University, working with the central communications team. As a PR and communications specialist, she has experience in handling strategy, media relations, crisis communications and social outreach for global and national brands, as well as for public sector organisations. Kat is also a Gold Standard NCTJ accredited journalist with a passion for fiction writing and self-publishing.