The European Space Agency’s (ESA) Euclid mission to study more than a billion galaxies is a step closer to launch as its two instruments are now built and fully tested, including a massive optical digital camera delivered by an international consortium.

Once Euclid is launched from French Guiana in 2022, the VIS instrument will be one of the largest such cameras put into space and will capture light from distant galaxies, providing a more detailed look at the visible universe over a larger part of the sky than ever before. 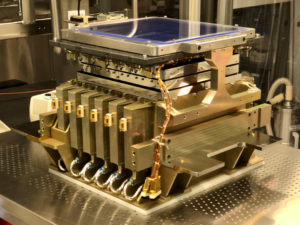 The VIS instrument was delivered by a team of astronomers and engineers from The Open University (OU) and UCL in the UK, with teams at CEA-Irfu, Institute for Research on the Fundamental Laws of the Universe of the CEA (The French Alternative Energies and Atomic Energy Commission) and Institut d’astrophysique spatiale (IAS, CNRS/Université Paris-Saclay) in France, Istituto di Astrofisica e Planetologia Spaziali (IAPS) in Italy and the University of Geneva in Switzerland.

Euclid has a 1.2-metre mirror telescope that is designed to work at both visible and near-infrared wavelengths. It will collect light from distant cosmic objects and feed it into VIS and another instrument, the Near Infrared Spectrometer and Photometer (NISP).

Unlock the mysteries of Dark Energy

Euclid will survey the shapes of galaxies and map the geometry of the Universe with the aim of making accurate measurements of mysterious Dark Matter and Dark Energy, which make up most of the cosmos. No-one yet knows what Dark Energy is, but Euclid will be a powerful tool for astronomers looking to find out.

“Euclid will revolutionise our knowledge of the Universe by making the most accurate measurements of Dark Matter and Dark Energy, testing whether Einstein’s theory of General Relativity requires modification, weighing neutrinos and exploring the details of how galaxies evolve.”

VIS and the Euclid telescope are built to be incredibly stable and to take very sharp high-resolution images in order to measure the shapes of galaxies with sufficient accuracy. To do this, the instrument has a mosaic of 36 charge-coupled devices (CCDs), to give a total of just over 600 megapixels.

The beauty of the Cosmos

“The VIS camera will take pictures of entire sky, making it accessible for large scale cosmology and reaching out to the most distant parts of the universe over the course of six years. Each of these images will be more than 70 times larger than those captured using the Hubble Space Telescope and will contain information useful for all fields of astronomical research. They will be available for astronomers and the public alike, allowing everyone to enjoy the beauty of the Cosmos.”

VIS has been funded by the UK Space Agency, and those of France, Italy and Switzerland, and has benefitted from support from the Euclid Consortium and from close cooperation with ESA.

The UCL team provided the system-level role, and produced, tested and calibrated the electronics for the detector array to ensure they survive the cold environment of space.

The structure for the camera was produced by CEA, the shutter by the University of Geneva, a calibration unit by IAS, a unit to operate these two by CEA, and a powerful data processing unit to capture all of the 144 individual channels from the camera and to control the instrument by IAPS.

OU scientists measured the damage caused by the space radiation environment to the scientific cameras within the VIS instrument. The image quality of the instrument degrades over time in the space environment, but the performance of the instrument can be corrected and maintained by understanding and modelling these effects, which can extend the lifetime of the mission.

Professor Andrew Holland, from Centre for Electronic Imaging at The Open University and co-investigator for Euclid VIS, added:

“The VIS instrument contains one of the largest detector arrays to be used in space and its demanding science goals have required the development of new operating modes and experimental techniques to enhance the quality of science data returned and to extend the Euclid mission lifetime. This research will inform and enhance future space missions going forward.”

The NISP instrument, which is being built by a consortium of nationally funded institutes led by the Laboratoire d’astrophysique de Marseille (LAM, CNRS/AMU/CNES) in France, is dedicated to making distance measurements of galaxies. With VIS, it will allow Euclid’s data to be turned into the largest, most accurate 3D survey of the Universe ever conducted.

Most of the universe is made of dark matter and energy

“We know very little about Dark Energy and Dark Matter, and yet many astronomers believe that together they make up an incredible 95% of the Universe. Euclid will help us unlock some of their secrets by imaging more than a billion galaxies in more detail than ever before.

“The UK is a leading member of the ESA and, in addition to funding the lead role on the VIS camera, the UK Space Agency is supporting the development new data processing capability with universities across the country. This will allow researchers to analyse the data that will be returned from space.”

Now that the instruments have been delivered to Airbus, they will be integrated first with the telescope, and next with the rest of the payload module, which will take several months to ensure everything is precisely aligned and electronically communicating.

It has been a long journey getting this far. Euclid was selected for implementation in 2011, having already undergone almost five years of studies. While there is still a lot of hard work and testing ahead, the delivery of the instruments and telescope means that the spacecraft is now really beginning to come together.