OU News
You are at:Home»Science, maths, computing and technology»Space»Back to the future: what we said about education and Astronomy

In 2009, in celebration of the Open University’s 40th Anniversary, we asked academics from around the University to predict what the future would look like in their areas of study.

Now, as we approach the OU’s 50th Anniversary, we asked the same academics to revisit their predictions, reflect on their accuracy, and reset them for the future; what does the Future of Education look like for them? 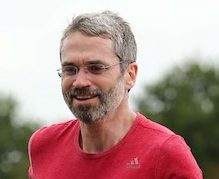 We spoke to Stephen Serjeant, Professor of Astronomy.

“My earlier predictions were all around the possibility of change, and the appearance of the unexpected. I certainly wasn’t wrong in the scope for surprises.

“The Herschel Space Observatory has been tremendous. It uncovered a fabulous new way of finding gravitational lenses, which are where we see a background galaxy through the warped space around a foreground galaxy. This warping makes the background galaxy seem brighter, and the Herschel observatory picked out hundreds of these surprisingly bright galaxies. Even more surprising was a Herschel discovery of bright, extreme starbursting galaxies very early in the Universe, as well as intriguing filaments of dust in our own Galaxy.

I was hoping that by now I’d be writing about the tremendous breakthroughs of the James Webb Space Telescope, but it’s unfortunately been delayed. It will still be a watershed moment in astronomy when it comes, particularly for finding the first galaxies that formed after the Big Bang, and the LOFAR radio telescope teams are still working hard at finding evidence of the first light from the first stars. Meanwhile though, the rival EDGES radio telescope found a very convincing signature of the first starlight from absorption signals against the cosmic microwave background. This is a beautiful result, and one of the last truly fundamental observations of the Universe that can be made with a “small” laboratory-sized instrument.

The LIGO experiment has really come up trumps. Colliding black holes and neutron stars have been spotted from very delicate ripples in space and time. This tremendous breakthrough has opened up a new way of looking at the Universe and has deservedly been quickly recognised with multiple international prizes including the Nobel Prize.

Another result that looked like it would win a Nobel was the detection of primordial gravitational waves in the Cosmic Microwave Background, but this result unfortunately was shown to be foreground systematics, after a very careful analysis. But I certainly could not have anticipated how this analysis happened: pretty much the entire professional expert community had a very detailed technical discussion in a Facebook group. This is probably the most quickly and thoroughly scrutinised big result ever in physics, and it all happened on social media.

The Large Hadron Collider has spectacularly found the Higgs boson, but curiously has found it difficult to detect evidence of supersymmetric particles. Therefore, the jury is still out on what dark matter is made of. Interesting claims about dark matter annihilation have been made from interpretations of space-based particle detectors, but these are still under discussion by the community. That withstanding, we’re still not much further along understanding dark matter. Dark energy is still even more mysterious, but the coming Euclid space telescope will shed some (metaphorical) light.

Ten years ago I didn’t anticipate the recent breakthrough in neutrino astronomy, finding neutrinos associated with a flaring active galactic nucleus (an accreting supermassive black hole). I also didn’t anticipate the explosion of exoplanet discoveries, though this was already on the cards. One of the many wonderful surprises was a terrestrial planet in the habitable zone around the nearest star to the Sun. A glorious moment in the past decade was watching live as the Curiosity rover landed on Mars, on a rocket-powered sky crane; one of the most magnificent scientific and technical achievements of our lifetimes.

Time domain astronomy has really opened up some wonderful opportunities for discovery, and this will only get better and we’re now firmly in the area of multi-messenger astronomy.

Liz works in the Media Relations team within the Communications Unit at The Open University. She has over 15 years' marketing experience working across a range of sectors, from diamonds to shampoo. She has a BSc (Hons) in Management from UMIST. In her spare time, Liz is usually found on roller skates or off travelling, having adventures.