A paper has just been published in the renowned science journal SpringerNature which highlights just how ground breaking our OU scientists are.

The report looks into the painstaking analysis undertaken on particles from the Hayabusa space mission, that set off in 2003 and returned to Earth in 2010, after taking samples from asteroid Itokawa.

Using the OU’s powerful Raman spectrometer and the NanoSIMS microscopes, that can investigate elemental and isotopic composition at the nanoscale level, scientists found small particles that showed the presence of water and organic materials on the asteroid that couldn’t have come from earth.

Is this really the first ever study to identify extra-terrestrial organic compounds from an asteroid returned to earth by a space mission?

“There have been previous studies which attempted to find organic matter on the Hayabusa samples. However, none of these previous studies found solid proof. So, yes, this is the very first study that does provide solid proof of organic material found on the surface of an asteroid returned by a space mission.”

What have you found? Why is it important?

“We found that a single grain, nicknamed ‘Amazon’, has preserved both primitive (unheated) and processed (heated) organic matter within ten microns (a thousandth of a centimetre) of distance. The organic matter that has been heated indicates that the asteroid had been heated to over 600°C in the past. The presence of unheated organic matter very close to it, means that the infall of primitive organics arrived on Itokawa after the asteroid was cooled down. Studying Amazon has allowed us to better understand how the asteroid constantly evolved by incorporating newly-arrived exogenous water and organic compounds. These findings are really exciting as they reveal complex details of an asteroid’s history and how it’s evolution pathway is so similar to that of the prebiotic Earth.”

How big is Asteroid Itokawa? Why did the mission want to study this particular asteroid?

“Itokawa’s diameter (in three dimensions) are 313-350m in size, which is equivalent to the height of The Shard, the tallest building in UK. The mission targeted Itokawa for a couple of reasons. First, asteroids are remnants of the solar system formation (materials that are left over after larger bodies become planets). They have not changed much since their accretion. Therefore, asteroids tell us a lot about the history of our solar system, information that is no longer available here on planet Earth. Second, remote sensing observation indicated the spectra of Itokawa was similar to ordinary chondrite meteorite – the most common type of meteorite recovered on Earth.”

The Hayabusa mission that returned these samples, set off in 2003 and returned to Earth in 2010 – why has it taken a decade to make this discovery?

“Scientists actually began to study particles recovered by the Hayabusa mission as soon as it arrived back on Earth in 2010. As a matter of fact, some previous studies found organic matter too. However, they could not distinguish the organics from terrestrial signature. After all, Itokawa is a S-type asteroid, which is typically not as carbon rich as some other types of asteroids like Cg- or B-type asteroids – the target asteroids of the Hayabusa2 and OSIRIS-Rex missions, respectively.”

How are the particles taken from a moving asteroid in space?

“Hayabusa means “falcon” in Japanese. This describes perfectly how it took samples from the surface of Itokawa – like a falcon capturing its prey in a vertical dive. Hayabusa spacecraft collected Itokawa samples by descending to the Itokawa surface in roughly a similar manner.” 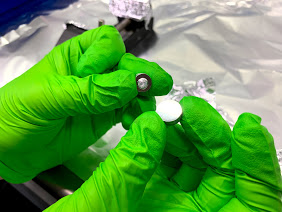 Surface on which the Amazon grain will be pressed into

“Oh yes! I am on the analytical team of the Hayabusa2 mission. We will begin our analysis of Hayabusa2 mission samples this summer. Ryugu is more carbon rich than Itokawa, and it once had liquid water that interacted with other minerals in its history. We hope to fully characterise the composition of the returned samples, and to find out how water and heating might have altered (or synthesised) organic compounds on Ryugu.”

How does this rank with other scientific discoveries in your career so far?

“This is one of the most exciting findings I have made. It was very challenging to investigate samples of this extremely small size, let alone the detailed characterisation including organic and water contents, and their isotopic characteristics to prove that they are not terrestrial contamination. Amazon is the size of less than half the diameter of a strand of human hair, I could not even see it with my own eyes without using an optical microscope. It was extremely gratifying to finally identify extra-terrestrial organic compounds in Hayabusa samples. We carried on looking because knew it had to be there!”