With a career as a naturalist and broadcaster spanning six decades, Sir David was awarded an honorary doctorate from the Open University in 1980 and has been supporting our work ever since, endorsing projects like iSpot. 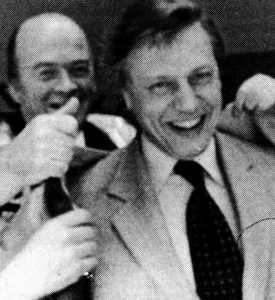 David Attenborough robes up ahead of the OU graduation ceremony in Wolverhampton in 1980.

In his speech, back in 1980, when invited onto the stage at Wolverhampton to accept his honorary doctorate from Mike Pentz, founding Dean and Director of Studies of the Science Faculty, he talked about how “the best you could do as a television producer was to light the flame of enthusiasm which would then ignite the audience and in its flames cause the audience to go and seek further ways of building upon the stimulus that they’d received”.

He continued to address the students graduating that day: “So for me this is an important occasion because it marks an end of what I have been watching as a BBC administrator, and then subsequently outside the BBC, as 10 remarkable years in a unique educational institution. But to you, surely, this is incomparably more important because it seems to me that what you have done calls for the greatest admiration… to me that is a major achievement which makes me draw my breath and which makes me also say congratulations and thank you very much indeed for allowing me to share your graduation ceremony with you.” 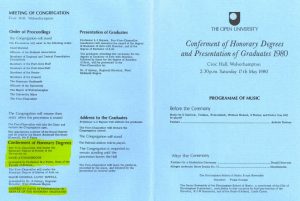 Mike Pentz referred to programmes like David Attenborough’s Zoo Quest as integral components of OU science courses and talked of the possibility of joining up audio-visual enrichment and independent study: “Perhaps we may entice David Attenborough into some sort of collaboration with The Open University in this area.”

Now, in 2016, the OU continues to enjoy a longstanding partnership with the BBC, including co-productions of David Attenborough favourites like The Hunt, Frozen Planet and Life in Cold Blood.

During this 1980 graduation ceremony, little did the now Sir David know that 35 years later, he would be turning 90 and celebrating a lifetime of remarkable achievement, including a close relationship with The Open University spanning many hours of broadcasting, and working alongside OU academics, like Dr Mark Brandon, OU Reader in Polar Oceanography. 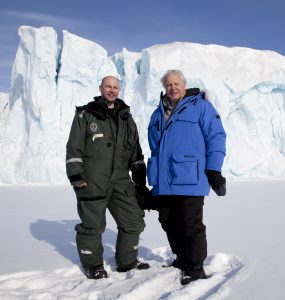 Mark knew he wanted to be a scientist after watching David Attenborough programmes as a child. Fast forward 30 years and after a long apprenticeship in the Arctic and Antarctic he became the lead academic advisor on the BBC Frozen Planet series, working with Sir David.

He said: “I was worried about meeting, but looking back I don’t know why. He was interesting, funny, kind, generous, and deeply tiring company!

“He questioned everything we filmed and I felt like I couldn’t switch off. But he listened so carefully and made the connections between the animal species to the environment we were in.

I watched him fit the different snippets of information together to construct a masterful understanding of the polar world and listened to him in front of the camera as he put our science into plain English. I’ll treasure working with him and in future projects I know what I can achieve because I’ve seen what my best work can be.

Dreams of becoming a biologist

Student Emily Robinson was inspired to start a biology degree, thanks to a long on-screen friendship with David Attenborough. She said: “He has been an inspiration to me and a welcome distraction from an unkind childhood. No matter where I am or what’s going on I could get lost in his shows, swept away to an island paradise or a freezing tundra. He may not know it, but he has been a friend to me for 33 years.”

After a period of ill health, Emily was permanently signed off work. “It’s funny how much you attach your identity to your job title. And without one I plunged into darkness for several months. It was then that I decided to put my time off to good use.

I began an Open University degree in biology with the hope that if I work on my fitness and stamina while I work on my dreams, that I’ll be a biologist at the end of it, and go off to continue animal conservation around the world, just like my hero.