OU News
You are at:Home»Science, maths, computing and technology»Science»Everton kicks off Science in the Stadium outreach project

This Sunday, at the last Everton FC home game of the season, Goodison Park hosts the world premiere of Science in the Stadium, a new science-meets-sport project from The Open University.

A football pitch is made up of around a billion blades of grass – you’d need the grass from at least 100 football pitches to match the number of stars in our galaxy.

“The sheer scale of the universe is incredible and it’s really exciting to share the big questions about life on other planets with football fans. This is the first-time a science outreach programme has taken place in a football stadium and I’m really excited to get people inspired by astronomy and space science in the most unlikely of surroundings.”

Focused on the theme of ‘Life in the Universe’, the centrepiece of the day is a short animated film, created by Liverpool-based production company RobotFoundry, about discovering exoplanets and investigating if they can support life. This will be played at half-time to more than 37,000 people attending the match. 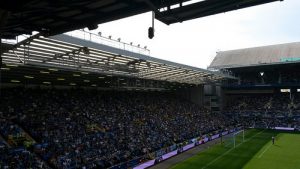 Everton Football Club – appropriately known in some quarters as “The School of Science” – has a proven track record of supporting education within the local community.

Scott McLeod, Everton’s Head of Content, said: “Working with The Open University on this enormously exciting project is something we have really enjoyed. We work hard as a club to find new and innovative ways to engage with our fans on a match day and bringing science to life in such a unique way certainly falls into that category.

“As our match day activity will prove, science can be engaging and accessible and we are sure Evertonians of all ages will embrace what is going on.”

In the run up to this event, a competition run by The Open University asked local schools to explore how they would search for life in the universe. The winning pupils will be invited along to the game and will meet space scientists in a special pre-match event in the Hub. The schools of the winning entrants will each get a visit from an astronomer, who will help them operate The Open University’s robotic telescope at Teide Observatory in Tenerife. This live session will mean they can request images of objects in the night sky and monitor the telescope as it moves to obtain the images.

The pre-match event in the Hub includes exhibitions from the OU, the Science and Technology Facilities Council, the UK Space Agency, Liverpool John Moores University and the Faulkes Telescope Project, focused on giving fans a closer look at the wonders of the universe. They will be able to find out how to train like an astronaut, take part in a space quiz and talk to scientists who are exploring space.

#scienceinthestadium will be used to highlight the event on social media and the project website will invite the public to engage and showcase some of the latest research and learnings about astronomy, planetary science and space science. The project was funded by a £10,000 Public Engagement Small Award from The Science and Technology Facilities Council. The idea for Science in the Stadium was first conceived by award-winning artistic director Jen Heyes and academic Dr John Baruch.