One of The Open University’s early female physics tutors has received the Breakthrough Prize for the discovery of radio pulsars. Dame Jocelyn Bell Burnell intends to donate the £2.3m prize money to help women and under-represented ethnic minority students to become physics researchers.

The money will be given to the Institute of Physics to fund PhD studentships to help those in underrepresented groups by providing access to research posts.  She told the Guardian that, “a lot of the pulsar story happened because I was a minority person and a PhD student….Increasing the diversity in physics could lead to all sorts of good things.”

A pioneer and role model

A sentiment echoed by Sally Jordan, Head of the School of Physical Sciences at The Open University, who commenting on Dame Jocelyn’s achievements hailed her as a pioneer in science,

“She is a pioneer in breaking down the barriers that restrict the advancement of female scientists and widen opportunities to many people to engage with science. Her decision to donate her prize-winnings is fantastic news. Despite a huge amount of work to rectify the balance, significant demographic gaps in progression in physics continue to exist across the UK and beyond. It is vitally important that we do all in our power to investigate this and to make whatever changes we can to promote equality of opportunity for all.”

“Jocelyn is a role model, a spokesperson and a promoter of women in science in the UK.”

“Our work to support all staff and students in their careers underpins the work of the School of Physical Sciences’ Equality and Diversity Team. The School is delighted to have attained Juno Champion status in the Institute of Physics Juno project which recognises a commitment to address gender equality in physics and to encourage better practice for all staff, and to have an Athena SWAN Silver award.”

Dame Jocelyn’s association with The Open University started in 1973 as a tutor. In 1991 she was appointed as a Professor of Physics, doubling the number of female physics professors in the UK and accepted her honorary OU doctorate in 2009. For ten years she led the physics department and is still fondly remembered from that time. Sally Jordan recalls the encouragement offered to her when she was a newly appointed staff tutor.

It highlights the importance of The Open University’s research into demographic gaps in attainment in physics.  Sally Jordan, also professor of physics education, is researching factors into the demographic differences in attainment. It is hoped the initial findings will informing the way in which science is taught. 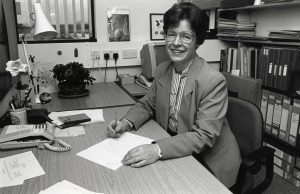 Dame Jocelyn Bell Burnell has been bestowed with a string of prestigious titles including: