OU News
You are at:Home»Science, maths, computing and technology»Science»Changes in global rainfall in the past give future climate change insight

New research from The Open University has revealed global tropical rainfall changes that took place during past climatic periods, which can help in understanding processes for the impact of future climate change.

The study by an international research team, made up of researchers from The Open University (OU), the British Geological Survey and Brown University, has revealed new insights in patterns of changes in historical tropical rainfall such as monsoon.

The study shows how the large-scale tropical rainfall pattern differed in response to changes in climate – warming and cooling periods – thousands of years ago.

The project, led by the OU’s research team Drs Pallavi Anand and Phil Holden and former OU researcher Dr Katrina Nilsson-Kerr, is the first detailed rainfall pattern assessment of the tropical landmasses, including new data for the Indian Summer Monsoon region, revealing regional differences in response to past climate change. 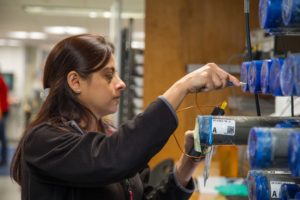 Dr Anand on board the IODP Expedition 353 Indian Monsoon

The samples for the study were collected by Dr Anand following an International Ocean Drilling Programme (IODP) voyage to the Bay of Bengal in 2014-15 to better understand historical variability of the Indian Monsoon in response to changing climate.

The paper, Dipole patterns in tropical precipitation were pervasive across landmasses throughout Marine Isotope Stage 5, is published in Communications Earth and Environment, a Nature group of journals (19th March 2021).

Some of the globe’s most densely populated regions are affected by the seasonal rainfall in the tropics. This occurs as northeast and southwest trade winds converge giving rise to what is known as the intertropical convergence zone (ITCZ). This convergence zone during the northern summer merges with monsoon circulation to bring seasonal rainfall to Indian subcontinent.

Samples of marine microfossils, preserved in the sediment, analysed in this study were ideally situated to capture past changes in the strength of the Indian Summer Monsoon, as continental rainfall feeds the rivers draining into the Bay of Bengal, promoting freshening of seawater. These data were combined with published data from 125 global locations across six regions in the tropics (30N and 30S) to make both regional and global comparison of rainfall patterns.

“Despite the complexities of the rainfall patterns, we found remarkable consistency between the data and the climate model, suggesting great potential for both validation of future projections and for understanding past variability.”

The project presented new reconstructions of the Indian Summer Monsoon precipitation and modelled existing hydroclimate (records inferred to represent rainfall) data to combine with climate model to assess regional differences in rainfall patterns for six regional landmasses during the warm climate state of the last interglacial, between 130 to 70 thousand years ago, comprising warmer and cooler intervals.

“How tropical monsoon rainfall will change due to human-induced climate change remains a big unknown. Therefore, it is crucial that we better understand monsoon rainfall pattern in response to climatic changes in the geologic past, to better inform climate models used for predicting its future variability.”

Putting their newly generated records in context with existing published climate data, she said the study reveals that the tropical rainfall pattern is “incredibly heterogenous and sensitive” to climatic changes.

Dr Nilsson-Kerr, the lead author of the paper, now at Heriot-Watt University, said:

“We have a fairly good understanding of how sea surface temperature (SST) varied in the past providing us with fairly robust predicted patterns of SST response to future warming. However, our understanding of how rainfall, particularly in the tropics, responded to past changes in climate and how it will respond to future warming remains inconclusive. We set out in this study to try and synthesize past changes in rainfall, using existing and new data, over a period of climate warming and cooling.”

The economy and livelihoods of people living in regions of monsoon rainfall, including the Indian Summer Monsoon, are greatly influenced by the rains it produces, during the months of June to September; extreme rainfall events can lead to flooding and infrastructure damage, whilst dry periods can result in drought, impacting socio-economic stability and food and water security in the region.

The next steps are to investigate the Indian Summer Monsoon rainfall response during the past geological warm climate states. Further integrated studies are needed to strengthen knowledge of tropical rainfall pattern in response to different climate states.