Democratic Reflection, a web application which can be accessed on desktop computers and mobile devices, allows the audience of a live event to instantly express their views in real-time.

Designed as part of a joint, three-year project, funded by the Engineering and Physical Sciences Research Council, known as Election Debate Visualisation. The project explored how citizens responded to and evaluated televised election debates.

“Democratic Reflection enables users to interact with the political debate in a truly personal and immersive manner, allowing them to express their spontaneous reactions, reflections and feelings over the ongoing debate before they can be biased by group dynamics.”

This information can then be linked to the event’s time or video index, thus providing analytical context to make sense and understand people’s reactions.

Voters have their say 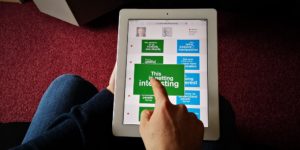 Voters were able to trial the platform during the first political debate, broadcast by ITV, on Tuesday (19 November).

As the British public settled in to watch the long-awaited debate between the Prime Minister Boris Johnson and Labour leader Jeremy Corbyn, 100 voters, who declared themselves as undecided, engaged in the lively discussions using Democratic Reflection.

The selected voters accessed the app and were presented with a set of 10 statements, in the form of digital cards, designed to capture their feedback and reactions.  Whilst watching the debate on a large screen and listening to the party leaders’ arguments, they were asked to select statements on their mobile screen that reflected their feelings at any moment during the debate.

By selecting the statements, participants in the trial were able to comment on each speaker, whether their arguments or policies made sense, were relevant to the voter or made a difference.

Personalised analytics – the data behind the app

The system recorded the selected statements and gathered the results to produce personal analytics on the user interaction, which will remain completely anonymous.

However, users were able to access their own personal analytics to reflect on their engagement with the debate.

“We analyse the feedback given and present it to the individual users as personalised analytics, allowing a far deeper understanding of both the discourse and their own feelings and opinions towards it. This interaction, both immediate and enabled in a private space, allows the user to go way beyond preconceptions and manipulations, including our own inherent biases.”

Stephen Coleman, Professor of Political Communication at the University of Leeds, adds:

“Not everyone finds it easy to make sense of political debates.

“The new real-time response app allows viewers to say what they’re getting out of the debate, and what’s confusing or annoying them – while they are watching it.

“We think that this has potential to provide vital democratic feedback from the audience to the politicians and broadcasters.”

The project team will produce an anonymised report to better understand the audience interaction, highlighting analytical narratives, which will be published in the New Year after the general election.

The platform has wider application and the project team are now exploring the use of Democratic Reflection as a tool to support peace building and peace education in developing countries.

Bridgette is part of the Media Relations team at The Open University, working with the Faculty of Science, Technology, Engineering and Mathematics. She has over 10 years’ experience in external and internal communications, working in the NHS, Civil Service, education, non-for-profit and the housing sector. She has a BA (Hons) in Media and Communications (Public Relations) from Birmingham City University. Bridgette enjoys cooking in her downtime and has recently taken up painting as a mindfulness exercise.