OU News
You are at:Home»Science, maths, computing and technology»PhD student’s part in the excavation of the Rutland ‘sea dragon’

Open University research student, Emily Swaby was at the centre of an exciting excavation – which has unearthed the largest, most complete marine reptile skeleton ever found in Britain, at the Rutland Water Nature Reserve.

She describes the uncovering of the skeleton, the fossilised remains of a 10m-long sea predator called an ichthyosaur which is between approximately 181.5 and 182 million years old.

The specimen was discovered by Joe Davis, Conservation Team Leader at Leicestershire and Rutland Wildlife Trust, during the routine draining and maintenance of a lagoon at Rutland Water, owned and run by Anglian Water, in January 2021.

This ichthyosaur is likely to be the first of its species (Temnodontosaurus trigonodon) found in the country and is a sister taxon (a group of one or more populations of an organism or organism) to T. crassimanus, a species that Emily and her supervisor revised whilst undertaking a Masters of Philosophy at The University of Manchester. 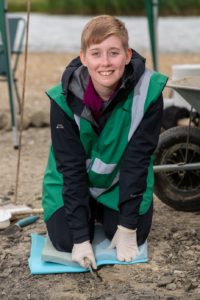 Emily’s MPhil was supervised by Dr Dean Lomax of Manchester University, who also led the excavation team at Rutland.

“The Rutland ichthyosaur is an incredibly significant discovery as it is one of the most complete large prehistoric reptiles ever discovered in the history of British palaeontology.

“It is also by far one of the most incredible palaeontological projects I’ve had the pleasure of working on in my career to-date and I’m honoured to have been asked to play a small part in such a dedicated team”.

Emily, who is in the second year of her PhD at the OU, is currently focussing on exploring the effects of the Early Jurassic (Toarcian) extreme environmental change on insects.

The excavation of the ichthyosaur will also feature in Episode 4 of BBC 2 series Digging for Britain (January 11th, 8.00pm).

Laura is a manager in the Media Relations team at The Open University. With extensive experience in PR and media management, she has led on external communications for a broad range of organisations, from global brands to local government. Prior to joining the OU, her work on high-profile campaigns included public health, education, finance and more.