OU News
You are at:Home»Around the OU»OU astronomer part of international team that captures galaxies in ultra-high definition

An international team of astronomers have published the most detailed images ever seen of galaxies beyond our own, revealing their inner workings and black-hole activity in unprecedented detail.

The images were created from data collected by the Low Frequency Array (LOFAR), a network of more than 70,000 small antennae spread across nine European countries. The results come from the team’s years of work, led by Dr Leah Morabito at Durham University, and including scientists from institutes across Europe, including The University of Manchester, The Open University, The University of Hertfordshire and The University of Edinburgh, supported in the UK by the Science and Technology Facilities Council (STFC).

Dr Judith Croston of the School of Physical Sciences at The Open University is part of the international team that built LOFAR’s new high-resolution capabilities. Dr Croston’s research group at the OU are using LOFAR to find and study new jets from supermassive black holes that are powerfully altering the galaxies in which they live. 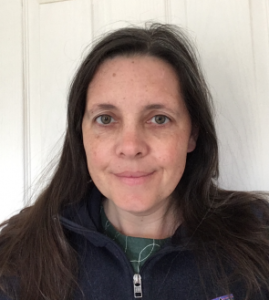 “Jets from black holes dramatically affect how galaxies form and grow, and LOFAR has taught us that these radio jets are surprisingly common. This new high-resolution capability means we can learn a lot more about how black holes at the centre of galaxies make jets. Most excitingly, it will help us find and study jets similar to those we think once existed in our own Milky Way.”

“Supermassive black holes are solar-system sized regions at the centre of galaxies, including our own Milky Way, from which no light can escape, and which contain millions to billions of times the mass of the Sun. The new images are the first results of a technological breakthrough that will enable astronomers to pinpoint how these black holes recycle enormous amounts of energy via powerful jets that transport matter across entire galaxies for distances of millions of light years, disrupting the formation of stars and influencing the history of how galaxies grow.”

Revealing a hidden universe of light in HD

The LOFAR network captures images at FM radio frequencies that, unlike shorter wavelength sources like visible light, are not blocked by the clouds of dust and gas that can cover astronomical objects. 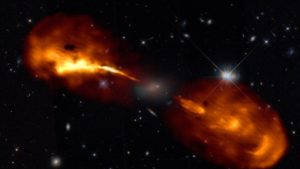 A supermassive black hole at the centre of a galaxy, seen faintly in the centre, shoots out jets of material across space

The universe is awash with electromagnetic radiation, of which visible light comprises just the tiniest slice. From short-wavelength gamma rays and X-rays, to long-wavelength microwave and radio waves, each part of the light spectrum reveals something unique about the universe.

Regions of space that seem dark to our eyes, actually burn brightly in radio waves. This allows astronomers to peer into star-forming regions or into the heart of galaxies themselves.

The new images, made possible because of the international nature of the collaboration, push the boundaries of what we know about galaxies and super-massive black holes.

“Our aim is that this allows the scientific community to use the whole European network of LOFAR telescopes for their own science, without having to spend years to become an expert.”

Even before LOFAR started operations in 2012, the European team of astronomers began working to address the colossal challenge of combining the signals from more than 70,000 antennae located as much as 2,000 km apart. The result, a publicly-available data-processing pipeline, which is described in detail in one the scientific papers, will allow astronomers from around the world to use LOFAR to make high-resolution images with relative ease.

The UK institutions involved in the project led by Dr Leah Morabito include:

Read the research papers available on ‘Astronomy and Astrophysics’.

LOFAR was designed, built and is presently operated by ASTRON, the Netherlands Institute for Radio Astronomy. Partner countries in the International LOFAR Telescope include: