On the 30th anniversary of the Docklands Light Railway, Emeritus Professor of Transport Strategy, Stephen Potter, considers the history and impact of one of the busiest transport systems in the UK.

In 2016 – 17, 122.3 million journeys were made on the DLR. To put this into context, the next busiest light rail system, Manchester Metrolink, only had 37.8m journeys. By any definition of type of railway, the DLR is in no way a ‘Light Railway’. It’s a full-blown metro system! 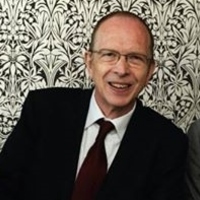 This may seem a bit of a pedantic point, but this definitional conundrum lies at the heart of the 30-year history of the DLR. The DLR started a lot closer to being a Light Railway, which is a rail system based on modern trams running partly on roads and partly on separate track. But the DLR soon needed to evolve and adapt to become, in practice, the East London metro. Each 84-metre-long train holds up to 800 people running entirely on separate tracks, including some underground sections. This is a big and important rail network, not just for Docklands but for the whole of East London.

Urban transport in a flash

Back in the early 1980s I visited the Docklands Development Corporation site in the West India Docks. In a temporary information centre where old warehouses had been flattened, I was told of ideas for the light commercial development that was envisaged for this site. Today, this is Canary Wharf.

The original DLR system was constructed in only two years at a cost of a mere £77 million.

Tower Gateway Station gave access to Central London; it was far from ideal, but because it used the site of the old Minories Station by Fenchurch Street, it was the cheapest option.  Disused freight lines were extensively used, but with some new bridges over the West India Docks. The 13km system, with 15 stations using 11 single-car automated driverless vehicles, was opened by the Queen on 30 July 1987, with passenger services starting on 31 August of the same year.

Initially, the DLR was almost viewed as a theme park railway, with its elevated track providing sweeping views over the empty development sites. But all this changed rapidly as the massive Canary Wharf development emerged. Even before the initial system opened, plans were approved for a short underground extension to Bank which opened in 1991. Funded jointly by government and Olympia and York, the Canadian developer of Canary Wharf, this cost £150m – twice that of the whole initial system. As Docklands developed and boomed, so further lines were added to the DLR – to Beckton via the Royal Docks, under the Thames to Greenwich, via London City Airport to Woolwich and to Stratford International in time for the 2012 Olympics. Eventually over a billion pounds came to be spent on DLR extensions and upgrades.

The cost of expansion

The extension to Bank revealed a design issue that proved tricky to resolve. The initial system, although quick and cheap to build, was far from easy or cheap to upgrade. For example, as it was designed as an above ground light rail system; emergency evacuation was via side doors. In order to run underground, extra wide tunnels were required to accommodate a side walkway. The single-carriage elevated station platforms were also expensive to lengthen as two and then three-car trains were introduced to accommodate surging passenger demand. Even on the Beckton extension, some of the above-ground stations cannot quite accommodate the longer trains, with the front and back set of doors staying shut.

That said, the DLR has undoubtedly been a big success and starting with a basic, low-capacity system made a lot of sense when there was little idea of how Docklands would develop. Major developments from Canary Wharf through to the Olympic Park provided the financial resources to rebuild the railway, but for a number of years the DLR was dogged by upgrading closures and passenger frustrations.

There is a lesson here about adaptive designs that can accommodate uncertain futures.

Today the DLR has moved to become a metro system in its own right. It is now part of a meshed rail network for Docklands with the Jubilee Line extension linking into West London and the DLR connecting to the surface rail lines south of the Thames. To this will soon be added the regional Crossrail service at Canary Wharf, Custom House and Stratford.

Perhaps an appropriate way to celebrate the DLR’s 30th anniversary is to recognise what it has become. It is not a tube line, but neither is it a light rail line. So why not rename it the “East London Metro” in recognition of the very major role it has played and continues to play in the economic and social transformation of such a vast area of London.

The article was also published in the Newham Recorder