OU News
You are at:Home»Education, languages and health»Sport»5 fitness trends for 2017

Simon Rea, OU Lecturer in Sport and Fitness, takes a look back at sport in 2016 and examines the big trends in fitness for 2017…

More people are getting involved in sport

As 2016 comes to an end Sport England released a very positive report saying that the number of women playing sport has reached an all-time high of 7.21 million. Their Active People survey showed an increase of 250,000 in the number of female participants since the ‘This Girl Can’ campaign was launched in 2014. Overall there has been an additional 229,400 people playing sport – recreational and competitive – in 2016.

Campaigns have clearly contributed to this increase and there has also been a very successful Olympic Games for British competitors. The Rio Games offered some strong role models, particularly female, such as the women’s gold medal winning hockey team. This year sport and exercise have been promoted as an adjunct to the creeping growth in rates of type 2 diabetes and obesity as well as increasing awareness of the effects of inactivity. 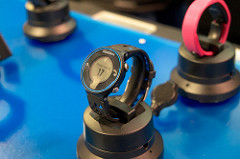 The last couple of years in the fitness industry have been dominated by wearable technology, such as fitness bands and smart watches, and apps to track activity. Sales of wearable devices exceeded 3m a year in 2015 and while activity trackers have huge potential to provide important information to a range of people – for example, health insurance company Vitality can base your monthly premiums on information about your activity level, it remains to be seen whether they are a passing fashion accessory or an essential item.

The Active People survey identified that 7.10 million people attend gyms regularly and this was backed up by Fitness Industry research saying around 12% of the UK population have gym memberships. However, the same research claims that only 12% of gym members actually enjoy going!  Well, exercise is hard work and usually painful so what are the new trends for 2017 that will make our experience of exercise more enjoyable?

In May astronaut Tim Peake, virtually ran the London Marathon in space using an app called Run Social. The use of virtual reality (VR) glasses will allow us to simulate runs through Yosemite National Park or around New Zealand’s North Island. Also, by the use of projectors in an aerobics studio VR will also allow us to attend fitness classes remotely from our own homes. This will enable exercisers to get the group experience and motivation of exercising with other people, without the journey to the gym. In particular, it will benefit people who are unable to get to the gym due to domestic responsibilities, lack of time and those people who feel uncomfortable exercising in public. Facility providers can also use this as a means of increasing size of classes and revenue.

Traditionally exercise has been instructed in large groups of around 20 people or on a 1:1 basis. However, fitness trainers are finding value in working with groups of 3-4 people. This group approach works well when offering high intensity interval training (HIIT) on treadmills or exercise bikes in a safe environment.  The development of the social group can improve motivation and help make the experience more enjoyable for participants. 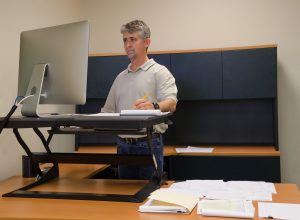 As we become more aware of the devastating impact of sedentary work with its links to increased risks of diabetes and other illnesses so measures are being stepped up to increase activity in the workplace.  We have seen standing desks but desks incorporating treadmills may become popular in the office environment. 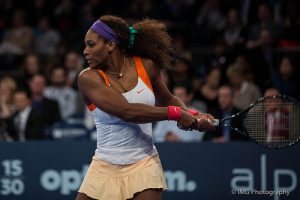 Traditionally the weights area has been populated predominantly by men while women have favoured the treadmills and cross trainers.

However, more women are seeing the value of weight training in improving their functionality and its impact on fat burning. This is supported by wider range of training equipment and increased expertise from trainers.

HIIT has been a success in recent years due to the rapid fitness gains and fat loss that high intensity exercise produces. High intensity training takes longer to recover from (up to 72 hours) during which time oxygen consumption is raised and calorie usage is increased.  Using HIIT in running, cycling and rowing have become very popular and now swimming is catching up on this trend.  The main benefit swimming has over other forms of HIIT is that it offers a lower risk of injury due to its lower impact on joints while still achieving high intensity (as long as you can swim!).

The fitness industry continues to develop and find new ways to engage the public and increase activity levels. 2016 has been a remarkable year for sporting achievement and let’s hope that this continues to inspire the trend of more people becoming active in whatever activities they feel suit them.