OU News
You are at:Home»Education, languages and health»Health»Sarah says OU study made her a better person and a better nurse

After all the challenges along the road to becoming a nurse, Sarah Burgess says she would “do it all again in a heartbeat”. 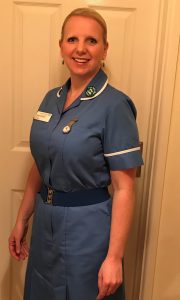 Recently qualified with a BSc (Hons) Adult Nursing, Sarah pays tribute to the support and encouragement of her tutors that kept going to the end.

As someone who left school with a few GCSEs, Sarah became a healthcare assistant, after being told she wasn’t academic enough to enter the nursing profession. Fifteen years later, she had progressed as far as she could, achieving related NVQs at Levels 2 and 3 during this time.

She says: “It was during an appraisal that my line manager suggested I do a nursing degree. Despite being convinced that I wasn’t capable, I decided to apply and was successful in getting a place on the OU’s BSc (Hons) adult nursing degree programme.”

She re-sat and passed her GCSE maths and says at her interview by staff from the OU, they put her at ease.

“I chose the OU because of its flexibility; I needed to be able to devote time to my home commitments and to carry on earning.”

“My tutors were fantastic and I really couldn’t have got through everything without them; in fact, I’ll be writing to the University to let them know. They were so helpful and supportive, as well as being non-judgemental.”

Sarah moved from accessing learning materials mainly delivered online in the first year, to her final year which she says has been entirely online.

“Once I got used to this way of studying it was fine. The OU website is easy to navigate; it’s clear and there’s a lot of guidance.”

“Even though you’re not physically in the same room as your fellow students, you’re still able to share ideas, which I found helpful. A private Facebook page was also set up for my cohort, although as we got to know each other better we texted and phoned each other instead of connecting via Facebook; you can make friends for life with the OU! While on placement, I saw other student nurses from the OU and from traditional universities, so there was a very good support network.”

Sarah believes the OU has given her transferrable skills, including how to research and write academically.

“Thanks to my OU studies, I’ve grown as a nurse and as a person. I love learning, it changes the way you think. I’ve got all this extra knowledge now, too, and a lot of the skills I’ve learned are transferable.

“To anyone considering OU study, I’d say do it, you won’t look back. It’s hard, but so worth it. For me, the highlights were passing each module and seeing my marks improve as I progressed. The pride you feel is something you definitely can’t buy!”

As well as working as a nurse, Sarah intends to do some further study with the OU, probably in the form of short courses such as Improving dementia care and Improving end-of-life care.

“My long-term plan is to stay in the nursing profession. Nursing is my vocation and I love it.”