OU News
You are at:Home»Education, languages and health»Health»Robert combines full-time work & study on his nursing journey

Former vehicle engineer Robert Wilkinson switched to a career in care and it soon became apparent to his managers that he had the potential to go further.

Encouraged to try the OU route, he admitted he had initial doubts:

“At first I thought it was going to be hard, I thought I’ve been out of education for so long – especially academically, but I’ve found it easy. It’s one of those things where you get out what you put in, so if you don’t study and you don’t work your hardest, you’ll not get anything out.”

Having left school at 16, with a good set of GCSEs, Robert joined the Army and trained in Engineering and Mechanical Maintenance. As a vehicle mechanic he fixed all types of vehicles, from the tractor vehicles and motorbikes, to tanks and big trucks

Put forward for a pilot scheme

He felt he didn’t have too many transferrable skills from the army to civilian life, and chose the care environment as a stable job he could do and because he enjoyed looking after people. 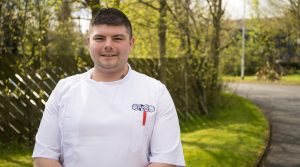 He was put forward for a pilot scheme to facilitate a route from caring into nursing.

“So it was my manager who asked me if I wanted to do it and it was something I was more than happy to do.”

He puts in the hours of study on his days off shift, doing about two hours or more, fitting in around his personal life with his wife and children.

“For me personally, I found it easy. You can manage it; two or three hours a day isn’t that hard. You probably spend that watching TV and I’ve sort of dedicated my TV time, or some personal time, to doing the studying instead. I don’t really feel myself as a full-time student, even though I do a lot of studying, I find that if you manage the time well it’s just like, like I said, it’s something instead of watching TV you can be doing a bit of studying instead.”

He says studying in this fashion suits him better than say a block pattern of theory and practice might have done.

And he is more than happy to recommend his career to others: “I’d 100% just tell them to go for it. My biggest worry was, in a couple of years’ time, if I didn’t take this opportunity I would have severely regretted it. At the moment I’ve been doing this for nearly 2 years, and there’s not once I’ve felt this was too much.

“I’ve found at first I thought it was going to be a struggle. I’ve never been one with computers and that was the only resource you had apart from the face-to-face sessions, but once you get used to it, it really does work.”

Once qualified Robert hopes to continue in the care home where is working and to build on his good relations with residents and staff. But further into the future, there could be more avenues:

“So I’d always sort of see myself working within the care home environment. That being said, I’d never rule out anything. If there was an opportunity to come maybe in the hospitals or in a more specialised field that I was interested in, I would go for that.”