OU News
You are at:Home»Education, languages and health»Health»Liz forgot her fear of needles to pursue her nursing dream

Liz Westwood was inspired to become a nurse because of two important influences – her late mother and her work colleagues. 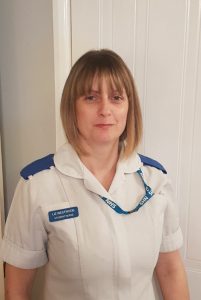 For the last eight years, she has worked as a Healthcare Assistant in a community specialist palliative care team (improving the quality of life for those patients nearing the end of life). Now she is nearing the end of her BSc Adult Nursing course with The Open University and qualifies as a registered nurse in September 2018. She intends to return to palliative care team but this time as a fully-fledged nurse.

Liz said: “In my twenties, if anyone had told me I would be a nurse, I would not have believed them! I’m not from a nursing family and I had a real fear of blood and needles, which luckily I overcame when I had my children.”

After a few different jobs, Liz, who is a married mother of two grown-up children, began working as a Healthcare Assistant (HCA). She then built on the GCSEs she gained at school, and completed an NVQ in Health and Social Care.

Liz says: “I love working with patients and am really passionate about becoming a nurse, and about end of life care. You only have one chance to get it right.

“My colleagues told me about the OU’s BSc (Hons) Adult Nursing degree course. “My youngest child was still at school and I had bills to pay so I needed something to fit around home and work.

I wanted to challenge myself and achieve something I never thought I could a few years back. I went to an information meeting about the course, then I decided to go for it!

Liz began studying for her OU degree in 2014, and has since worked part-time in my HCA role and as a student nurse with the community nursing team.

Speaking about her inspirations for study, Liz, who is in her mid-forties, says: “My committed team really inspired and encouraged me to do it, especially the more mature nurses. I have also lots of people who are older than me and have completed OU courses, who reassured me I could do it. My mum also really inspired me. She was always poorly as I grew up and unfortunately passed away in 2010. But she always said I should be a nurse – she really spurred me on. I’m sure she will be very proud of me.”

Liz says that her self-confidence improved with her studies.

I’ve turned from someone with self-doubt to self-belief. I’ve gained some valuable skills and feel I have become a good, compassionate nurse, and have had lovely feedback from both staff and patients.