OU News
You are at:Home»Business and law»Governments, the law, and long-term issues for Ukrainian refugees

It could be many years before Ukrainian refugees will be able to go back home even if the war ended soon so governments in countries of refuge may need to be thinking of a long-term plan of action.

That’s according to Dr Natalia Szablewska, Professor in Law and Society at The Open University who specialises in conflict, and says that on average refugees around the world spend over 20 years in exile and some may not be able to eventually return at all.

The United Nations estimates that so far 11 million people have fled their homes in Ukraine, with the majority being displaced internally and over 4 million finding refuge in the neighbouring countries – 2.5 million in Poland alone.

Amazing response from the public

Dr Rowan Williams, the former Archbishop of Canterbury, recently spoke of the “extraordinary” generosity of the public in the UK and abroad in offering refuge to Ukrainian people, which has avoided the need for refugee camps.

Downing Street said last month that almost 140,000 UK citizens had registered their interest in the Homes for Ukraine initiative to house them for a period of six months.

“Such a response is very welcomed as it means we have been able to avoid setting up refugee camps, which have become a common feature of modern humanitarian crises, to provide safety and security to those – as in this case – fleeing conflict.

“Refugee camps are to be avoided, if possible, especially in current circumstances as they heighten the risk of COVID-19 spreading due to overcrowding and limited access to basics.”

Legal protection that is offered

Refugees are protected under the 1951 Refugee Convention and its 1967 Protocol, complimentary regional laws and standards, as well as corresponding domestic laws.

Refugees have rights and entitlements under the Refugee Convention and, depending on the domestic law, have the right to lawfully stay, work, study and access free healthcare.

“Being a refugee and having a refugee status is not the same,” Natalia explained. “Under international law, a refugee is someone who meets the definition under the Refugee Convention irrespective of whether they are formally recognised as such or not.

“But I suspect many refugees from Ukraine will not seek for their refugee status to be formally determined by making asylum claims.”

Given the mass influx of refugees from Ukraine, a non-EU country, the EU has triggered the application of the 2001 Temporary Protection Directive, created in response to the Balkan conflicts in the 1990s, to ease some of the pressures on the asylum system.

In practical terms, it allows for granting a group-based legal status to Ukrainians, rather than individual ones. This temporary and emergency response allows Ukrainian refugees who find themselves in the EU to stay up to three years without a visa and have access to medical care, education and the job market. 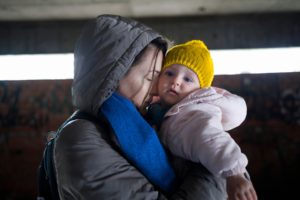 The UK government is enabling Ukrainian refugees to apply for visas based on either a family link, for those already with a family member in the UK, or under a sponsorship scheme, where families offer a safe place to live rent-free for at least six months.

Those people are allowed to take up employment, study and access public funds during this time here in the UK. But the UK response has been widely criticised for being overly bureaucratic and fraught with visa-issuing delays.

“The government responses need to be seen in a wider context. The refugee protection is considered to be inherently temporary and most Ukrainians, as is the case with other refugees, will want to return home as soon as possible. But we know the reality is often very different.”

She said under International Humanitarian Law, civilian infrastructure is supposed to be protected in armed conflict. But if critical infrastructure and civilian objects are destroyed, as has been the case in parts of Ukraine, it means people can’t go back. The consequences last way beyond the conflict officially ending.

Benefits of refugees working but vigilance over trafficking

“In any crisis, whether human-made or a natural disaster, the increased risk of modern slavery, including human traffickers, is very real and society and governments need to be vigilant.

“Already there are reports in the media of women and children who have gone missing. Vulnerable people become exposed to unscrupulous employers and organised crime groups that aim to exploit them.”

She said there’s a need for immediate and long-term responses to the humanitarian crisis, which must include anti-trafficking efforts that comprise early detection and preventive measures.

“We know that any unsettled status in a host country increases the risk of various forms of exploitation and it’s very important those who flee Ukraine are offered certainty over their legal status long-term and can access employment legally.

“Not only do refugees assimilate better when they can contribute to the community they live in but it will also minimise opportunities for exploitation of their desperation and precarity.

“As much as I remain hopeful about the current peace negotiations between Ukraine and Russia, it is not unthinkable that the situation of fighting will continue for years to come. We need to prepare for such a scenario and act accordingly.”