OU News
You are at:Home»Arts and social sciences»Society and politics»TV series sheds light on real life journey of refugees

The subject of refugees and their often dangerous journeys into Europe has barely been out of the news in recent years. Now, a powerful new BBC series – produced in partnership with The Open University – is set to cast a new light on those directly involved.

Exodus: Our Journey to Europe charts the journeys of refugees across a whole year, as they travel across 26 countries in inflatable dinghies, the back of lorries, open trucks and on foot.  The majority of the three-part series is based on footage shot by 70 refugees who were given camera phones and asked to capture their experiences in 2015.

Dr Caroline Ogilvie, Head of The Open University’s Broadcast Unit which commissioned the series, explained why this was an important project:

The Open University works with broadcasters like the BBC to produce programmes which educate, inform and stimulate debate.  Our academics worked closely with producers throughout the production process, offering academic expertise and guidance. The issues raised in the series are core themes in a number of OU courses, and we hope this powerful series encourages viewers to explore these topics in more detail. 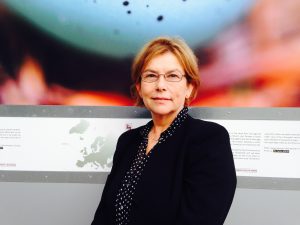 Prof Gillespie said the current debates in the media and from politicians give a distorted view of the refugee crisis:

Most of the coverage we see puts refugees in the spotlight, challenging their motivations or questioning their right to protection in Europe. Rarely do we hear the voices of refugees which get drowned in the cacophony. This documentary series opens our eyes wide, offering rare and moving insights into the human dimensions of this crisis.

Prof Gillespie interviewed the production team to understand how they undertook the filming, much of which involved families with young children.

She has also previously conducted research into the use of smartphones by refugees; how they are both a blessing and a curse and how there is a lack of real, trustworthy information on their journey.

Dr Canning is a lecturer in criminology and says the series opens up questions around the criminalisation of refugees.

She describes how she hopes the series will challenge some of the preconceptions surrounding refugees.

Dr Umert Erel’s work explores issues of gender and family among migrant communities, which also feature heavily in this series.

All the academics have contributed to discussions and further material on the OU’s OpenLearn pages on both the making of the series, including a timeline by Dr Canning, looking at the illegalisation of asylum seeking and the consequences it can have on people seeking sanctuary.