OU News
You are at:Home»Arts and social sciences»Society and politics»Totem brings the messages of climate change on way to COP26

A giant totem, bringing messages all the way from Mexico about climate change has been stopping off at sites en route, thanks to a collaboration with The Open University.

The 4.5m high wooden structure drew onlookers’ attention in the forecourt at Milton Keynes Train Station, where it remained for four days. It made a further stop in October, in front of Hexham Abbey, Northumberland. 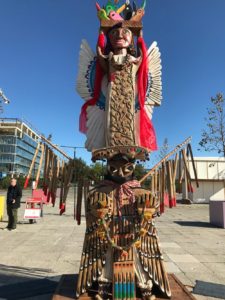 The totem will be stopping along the way before arriving at its destination in Glasgow next month.

Called Totem Latamat, the colourful artwork was carved from a single tree during a ceremony to thank it for giving its life. The head of a man and the wings of an eagle are sculpted into the cedar wood, the chiselled lines imprinting a message that will stretch 9000km from Mexico to London.

It was carved by Indigenous Totonac artist Jun Tiburcio. “Latamat” means “life” in Tutunakú, and the totem is expressive of Totonac spiritual ideas as they relate to the environment. It emphasises how deeply our existence is interwoven with nature, calls attention to the damage being done to the seas, the land and the air, and insists that we cannot ignore this destruction any longer.

Professor of Religious Studies at the OU, Graham Harvey, worked with colleagues of Border Crossings to bring the totem to the UK for COP26, the international climate change conference which takes place in Glasgow next month. It is designed to engage the public and politicians with the messages from the Indeginous people of its home nation.

“Totem Latamat brings a message from Indigenous people to COP26 – and to everyone who encounters it – that celebrating and living responsibly among Earth’s life is the best reason for urgent action in the face of climate change.

“The experience and resilience of Indigenous peoples and cultures is worth listening to because while they comprise less than 5% of the world’s population, indigenous people protect 80% of our global biodiversity.” 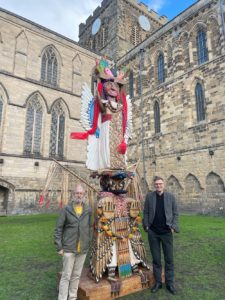 Prof Harvey explained the particular significance of the hummingbirds at the top of the totem, saying these small birds are understood to be messengers who make the point that each of us becomes responsible for acting on the news or facts we hear or witness.

Discussing the links to his academic study he adds:

“My research focuses on the ways in which Indigenous people use traditional ceremonies and narratives to address urgent contemporary issues. Most pressing among these is climate change.

“Long-term celebration of human kinship with the larger-than-human community (sometimes called “nature”) is the foundation of the ceremonies and stories that encourage respectful relationships. I’m interested in cultural festivals as well as political activism in which Indigenous people seek to convey a message of the need to respect life rather than irresponsibly consume everything.”

The creator of Totem Latamat, Jun Tiburcio, lives in a village and region which suffered major damage in a recent hurricane made more ferocious by climate change. 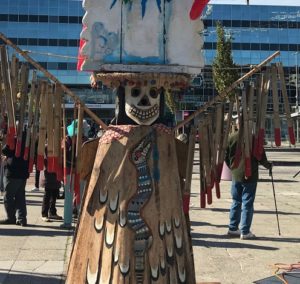 The totem was carved from a single tree

“The message of the totem is therefore not about a future threat but about the present experience of anthropogenic climate disaster. This makes his message (“celebrate and live responsibly among all life”) eloquent and powerful,” said Prof Harvey.