Dr David Scott said: ‘The tragic fire at Grenfell Tower, following a catalogue of errors and mismanagement, led to the loss of 71 lives and is one of the biggest indictments on the toxic and deadly harms generated by the policies of deregulation and austerity in the last decade. The Open University film ‘Grenfell Tower and Social Murder’ draws upon the powerful testimonies of survivors and families of the bereaved of the fire, and to be nominated for this prestigious award is a great honour.  The film is dedicated to the continued struggle for truth, justice and recognition for all those who lost their lives and hopefully the film can provide an important educational tool to help ensure that there is no future repeat of the horrible events of the 14th June 2017.’ 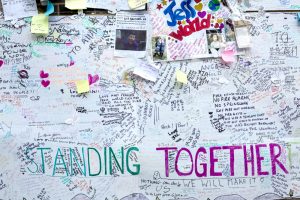 Nearly 150 films were submitted for the Awards this year and the overall winner for each category, who will receive £2,000 towards their filmmaking, will be announced at a special ceremony at 195 Piccadilly in London, home of BAFTA, on 8 November. Launched in 2015, the Research in Film Awards celebrate short films, up to 30 minutes long, that have been made about the arts and humanities and their influence on our lives. There are five categories in total with four of them aimed at the research community and one open to the public.

Mike Collins, Head of Communications at the Arts and Humanities Research Council, said: “The standard of filmmaking in this year’s Research in Film Awards has been exceptionally high and the range of themes covered span the whole breadth of arts and humanities subjects.

“While watching the films I was so impressed by the careful attention to detail and rich storytelling that the filmmakers had used to engage their audiences. The quality of the shortlisted films further demonstrates the fantastic potential of using film as a way to communicate and engage people with academic research. Above all, the shortlist showcases the art of filmmaking as a way of helping us to understand the world that we live in today.”