OU News
You are at:Home»Arts and social sciences»Society and politics»Charity t-shirt scandals: Is a low wage better than no wage at all?

The news that workers in Bangladesh were being paid 35p an hour to produce the Spice Girls t-shirt, emblazoned with ‘Gender Justice’ on the back, caused consternation. Dr Lorena Lombardozzi, Lecturer in Economics, blogs for LSE about the problem with the lack of accountability in value-chains.

Dr Lombardozzi says there is a contradiction between what feminist pop-stars say, and what happens in reality:

“On the one hand celebrities sell t-shirts and use their popular and powerful channels to convey messages which are supposed to mobilise civil society and provide a voice to disempowered women. On the other hand, by buying or trading such commodities, they become part of and further legitimise the intrinsic exploitative and patriarchal mechanisms through which those systems of T-shirt and fashion production are embedded and operationalised.”

The rules of the game need to change

But we can’t blame consumers for this dysfunctional system, argues Dr Lombardozzi. She notes that those in the initial stage of production, who produce the raw commodity, made little money and work in poor conditions. But those at the other end of the chain get much higher financial returns. 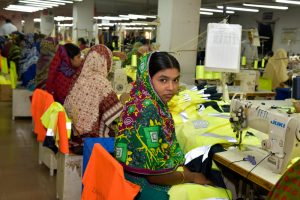 Workers in Bangladesh can be paid poorly

The problem is that the metric we use to judge a country and an economy – GDP – points political attention to purely wealth and prices.

“For years we have been discussing how GDP, by ignoring systematically crucial ‘values’ such as workers’ well-being, environmental pollutions etc….creates a normative bias in the way policies are made and objectives defined.”

Dr Lombardozzi says that “Although attempts already exist to address this normative bias and account for criteria related to workers wellbeing and access to technology, collective responsibility has to be taken and political decisions need to be made to halt this false narrative.”

Read the original blog in full on LSE

An OpenLearn interactive course untangles in 15 minutes “The Secret life of T-shirts” . It documents the complex global supply chain of a typical T-shirt you might find in high street shops to understand first who are the different economic actors behind the process of production and exchange but also how big their respective piece of the cake is.