OU News
You are at:Home»Arts and social sciences»Society and politics»Bercow should see and speak only as directed by MPs: New Speaker of the House of Commons needed, says OU expert

Reader in Government, Richard Heffernan, argues that John Bercow has overstepped the mark with his comments on Donald Trump.

Highly political and too public a speakership

A bright, highly intelligent man, Bercow has the abundant talent to have been a truly great Speaker.

“He has been far keener than many past Speakers to enable MPs to check and balance the government, not simply supply and support it. At his worst he has been far more impressive than Speakers Martin and Thomas at their best. But too often Bercow falls short of the behaviour required of him. Suggesting President Trump is a sexist and a racist, someone who opposes equality before the law, or endangers judicial independence, is something expressed by many on the left of politics. It is, however, not something the Speaker of the House of Commons should say in the House of Commons.

Speakers must have “no eyes to see nor tongue to speak…” 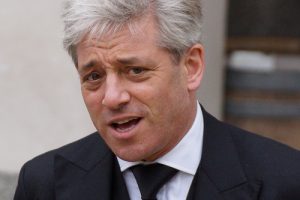 Speaker of the House of Commons, John Bercow

“Entering the realm of political debate by expressing any form of contestable opinion is not the place of any Commons Speaker. The fact that such partisan activists, for instance the likes of left wing Owen Jones, should celebrate Bercow for his expressed political opinion is proof Bercow has overstepped the neutrality line. The same would be true should a right wing figure have commended him had he praised Trump. Bercow’s views on Trump are merely political opinions, not facts. Such opinions are both challengeable and contestable. Some agree with Bercow; others do not. But Speakers must have no such political opinions. They are meant, as a past proper Speaker famously observed, to have ‘no eyes to see nor tongue to speak but as [the]House is pleased to direct [them]’. Bercow has not been so directed on the matter of Trump.

“It is a longstanding practice that Speakers avoid splenetic fits of righteous political anger whilst in the chair. No Speaker should grandstand from that chair. Nor should they play to any political gallery, liberal or conservative. But, far more importantly, no Speaker, should he or she wrongly speak of politics, can then find favour from only one particular part of the House. Only Labour and SNP MPs have praised Speaker Bercow’s criticism of Trump. Only they applauded him. Bercow, sadly, has long been considered a ‘partial’ Speaker. He has the reputation amongst many MPs and observers of being ‘Labour’s’ Speaker, not that of the whole House. He long ago lost the trust of numerous Conservative MPs and perhaps the support of a majority of the Conservative parliamentary party. This has long called Bercow’s Speakership into question, and it something further underlined by his bizarre and unprecedented decision to denounce president Trump.

Speakers should be seen, not heard

“Had Bercow real concerns, as opposed to being eager to grandstand to a liberal lobby, he could have let such concerns be known privately. Perhaps, being a former member of the clearly racist and certainly sexist Monday Club, the Speaker is overcompensating to atone for past sins. If so, that is commendable; past transgressions can be forgiven. But he can only so publicly atone as Mr Bercow, citizen or backbench MP, not as Mr Speaker. Speakers have to be seen, but not heard. They have to be above politics. Including identity politics.

So Speaker Bercow, being sadly ever keen to be heard, ought no longer be seen: The Commons should find someone more suited to the role.

“With the broader support of the House. Any Speaker wrongheaded enough to express political opinions- opinions, moreover, which find favour with only MPs on the opposition benches (and certain newspapers)-  has sooner rather than later to be removed from his office.”