OU News
You are at:Home»Arts and social sciences»Society and politics»Anne overcomes adversity to reach her graduation goal

Anne is 69 and has wanted to achieve her degree her entire adult life. Having left school at 15 and started her career as a telephonist and receptionist, she married and gave birth to her daughter, Sandra. After her husband sadly passed in 1984, she battled with bladder cancer and severe arthritis. Recovering after years of treatment, she remarried and enrolled with The Open University. Anne describes achieving her degree as her “personal goal” in life. She recently graduated with a BSc in Social Sciences at the Gateshead Degree Ceremony.

A long and challenging journey to study

Anne was born in 1948 and lived in Gateshead. After failing the 11+, she went to a secondary comprehensive, left at 15, and started work straight away in an office: 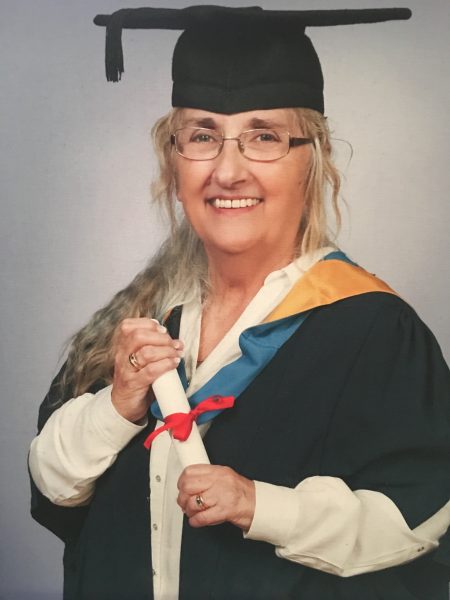 Anne Sadler graduated with a BSc in Social Sciences

“I eventually joined the General Post Office as a telephonist and that’s where I met my husband, Colin. We married in 1968 and we moved south for his career. In 1974 I gave birth to my daughter, Sandra. It wasn’t until two years later that I started to think about study again. I used to listen to the very early morning radio programmes by the OU and enjoyed them, but I couldn’t listen properly as I had a little toddler hurtling around at 18 months old. I really wanted to study, but my husband regularly traveled for work and I had nobody to care for Sandra.

“Sadly, in 1984, my husband had a heart attack and passed away. At 35, I found myself a widow with a nine-year-old daughter so decided to move back to Newcastle, bought a house and settled. I started to consider a degree again to keep myself busy so I contacted Northumbria University. They suggested it was possible, but I would have to work – I knew nothing about applying for grants and loans – to fund my studies and I wouldn’t be able to work and study full time, so I let it drift again.”

“It was always at the back of my mind that I wanted to study, because I felt that I should have passed the 11+. I decided that it would have to wait for retirement; I remarried in 2008 and, after retiring at 60, I was accepted as a mature student by Northumbria University.

“A year later and another hurdle came – my health deteriorated. I had severe arthritis and, whilst being wheelchair-bound, was diagnosed with bladder cancer. I had to leave my studies again. However, the cancer was treated and my arthritis settled. I was so determined to study again, because I loved my first year at Northumbria University and it was a personal goal for me. So I researched other options.”

Learning curve to being a student

Anne decided to enrol because of a friend who suggested studying with the OU:

“The most challenging element was the assignments. For me, academic writing is quite difficult, but you learn that. Also, I am not very technical so I had support from my daughter, and the rest of the family,  when I was stuck with the online student portal.

The great thing about the OU is that it is there for you; although you are studying on your own, there is always support from your support team and your tutor.

“All that studying has brought me to now. I could have completed another year for the Honours, but I thought, I’ve achieved what I wanted to with massive support from all of the family and grandchildren.

“I recently collected my degree at the Gateshead Degree Ceremony and was absolutely terrified walking across the stage. I’m basically a shy person so I had my head down, shook hands with the Chancellor, and as I was walking to the other end of the stage, I heard my grandchildren shout: “Go Grandma!”

Advice for anyone considering studying with the OU

“Ensure that you are interested in the subject and be prepared to read lots. I would say, just go for it; if you feel you can, and inside you know you can – go for it.

“The course has made me more aware of others in society, and has widened my horizons. I don’t take everything as Gospel – I look back to understand what has led to a situation. Studying Social Sciences makes you think about stories you would have previously passed by in the media; it opens your mind to the world.”

For information about the Social Sciences degree options, visit the website.