OU News
You are at:Home»Arts and social sciences»History»#MY100: Celebrating the vision of one of University’s founders

The lifetime achievements – and lasting influence – of one of the founders of The Open University has been celebrated with a centenary conference in his name.

The Young Foundation, established by Michael Young (1915 to 2002), hosted the Michael Young Centenary Conference 100 years after his birth. It was held at The Barbican, London, on Wednesday 11th November, bringing together social innovators, practitioners and academics to explore his achievements and continuing influence.

It was because of Michael Young’s vision of expanisve accessible and high quality education, that The Open University exists today. Current Vice-Chancellor, Peter Horrocks, delivered a keynote speech reflecting on his original vision and how the uniervsity would continue to build on that legacy.

Michael Young’s incisive analysis of British society and politics made him one of the foremost thinkers of the age. But he was never content simply to offer an academic critique of what he saw. Instead, his real legacy is in the practical policies and influential institutions which he helped create. These organisations reshaped post-war Britain and continue to be profoundly important today. And perhaps one of the best-known and most-loved aspects of that legacy is The Open University. 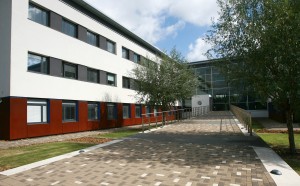 The Michael Young Building at The Open University’s campus at Walton Hall, Milton Keynes, and home of the OU’s Business School.

He added: “Michael Young was a profound believer in the transformative power of education and was always deeply concerned with issues of inequality and exclusion. He partly made his name, of course, by taking on what he saw as the social divisiveness of the grammar schools. In the early 1960s, he turned his attention to higher education, and the way in which bright people were being denied access just because of accidents of birth.

“Higher education at that time simply wasn’t designed for anyone who didn’t fit the mould. Anyone who needed to work at the same time. Anyone who wasn’t eighteen years old. Anyone who didn’t have traditional qualifications. Michael was determined to tackle this problem, and ensure that anyone who had the determination and passion to succeed – however old they were, whatever their background, wherever they lived – was given the chance.”

The #MY100 conference included reflection on the impact of his legacy, as well as discussion on contemporary thinking and innovation in our efforts to tackle today’s rising inequality. The day aimed to bring together insights and ideas from thinkers and doers from across the social innovation and equality movements.

“We have to equip students with the skills they need to flourish in this world” @PeterHorrocks @OpenUniversity @the_young_fdn #MY100 — The Young Foundation (@the_young_fdn) November 11, 2015

You can read the Vice-Chancellor’s full keynote speech here (pdf).