The album features a world-first recording of Handel’s Eight Great Harpsichord Suites, Chaconne in G major, overtures and operatic arias for the harpsichord, and will be premiered at the Foundling Museum, London, on Friday evening.

It’s the brainchild of Bridget Cunningham, Artistic Director of London Early Opera, who devised and performed the album as part of a series of Handel recordings with Signum Classics to celebrate the 300th anniversary of these works’ first publication in November 1720. Bridget is also undertaking a Music PhD at the OU.

Giving audiences a window into the past

Professor Donald Burrows and Dr Helen Coffey’s, George Frideric Handel: Collected Documents has heavily influenced this new work. Their research, published in 2014, was the culmination of several decades of analysis to catalogue Handel’s life, career and music. These collected documents and Burrows’ world-leading sheet music, known as editions, of Handel’s compositions, have become the authoritative source for contemporary musicians to accomplish historically-informed performances of the composer’s work. 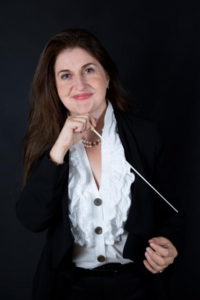 Bridget says the academic research allows modern audiences a chance to hear Handle’s work how he intended it:

“Handel often changed his works between composition and performances, resulting in several different versions of the same piece, which can make it difficult for musicians today to know how these beautiful pieces would have sounded. The high level of detailed work and sheer dedication of Dr Helen Coffey and Professor Donald Burrows makes me as a performer much more aware of the bigger picture and inspires and informs me to improve my own critical research and get right into the heart of the music itself to think creatively about new programmes in a historical context.”

“The Handel Collected Documents are the “go to” books for researchers and performers of early eighteenth-century music in London, not just of Handel’s music. They set the scene and whisk you way to the hustle and bustle of eighteenth-century London and you can imagine having conversations and listening to music with Mr Handel and his friends.”

Bridget is a prizewinning harpsichordist and conductor who trained at the Royal College of Music where she was awarded a Fellowship. She says Handel has always been a huge influence on her:

“From growing up listening to and performing Handel’s works – his oratorios, operas, cantatas, keyboard music, violin sonatas and orchestral music, I have always felt a strong connection to Handel’s music. With his beautiful melodies, extravagant and bold harmonies, richness of orchestral colours, agile and fearless vocal and keyboard writing,  mellifluous phrasing  – there’s something for everyone to enjoy.”

The Open University’s Dr Helen Coffey, one of the authors of the academic research, said:

“Our research charts the life, career and music of one of the world’s most celebrated composers. Still, it’s talented performers such as Bridget and her colleagues in the London Early Opera who bring this work to life. It’s tremendously rewarding to see how, through them, we can touch modern audiences by allowing them to hear music in the same way people 300 years ago would have heard it for the first time.” 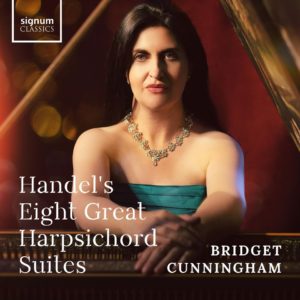 Bridget is releasing singles from the album online before its official launch during a harpsichord recital at the Foundling Museum, London, on Friday 19th November 2021. The performance starts at 7 pm and opens the Handel Institute Conference 2021, a three-day celebration of the composer’s life and work. Burrows will host the conference as chairman of the institute, and Coffey will chair a session on the influence of Handel’s music in Vienna.